The Nerdy Student
Advertisement
Home Uncategorized New Pokémon and Features In Pokémon Sun and Moon Announced!
New features and Pokémon have been released!

As normal, the Pokémon you encounter first in the game are Flying, Normal, and Bug. Grubbin’s Pokédex entry says it can be found near power plants and substations, which may suggest that there are going to be power plants and the like early in the game. 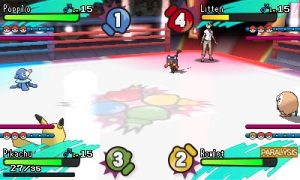 Battle Royal has a new awesome feature. Each of the four trainers choose three Pokémon, and send out one into battle at a time. The battle finishes when all the Pokémonn of one trainer have fainted, and then the players are ranked. Victory is declared based on the number of Pokémon each defeated and the number of Pokémon each player has remaining in play.
I can’t wait to try out the Battle Royals out, as they look like brilliant fun!
So those are the latest features we have been told about. The release date has also been moved forward (I believe) to the 18th of November, 2016. I can’t wait!
Thanks for reading!
What do you think about the new features? Feel free to comment below!
Advertisement