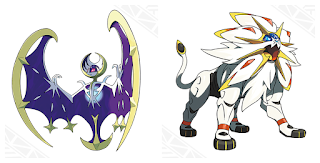 The new legendary Pokémon for Sun and Moon have just been released!

Solgaleo is the legendary Pokémon for Pokémon Sun. It is Psychic and Steel type. Solgaleo’s ability is really good; it’s a new ability, Full Metal Body. This ability is where a Pokémon’s stats are not lowered by the effects of an opponent’s moves or Ability, which is one of the best abilities I have seen.
Pokémon Moon’s legendary Pokémon is Lunana. It is a Psychic and Ghost type Pokémon. I wouldn’t say that Lunana’s special ability is as cool as Solgaleo, but it’s still pretty good. Lunala’s Ability is Shadow Shield, which is also a new ability. What it does is when Lunana has full health, it will take less damage from an attack. However, this only works when it has full health, so I don’t think it is as good as something that means that you can’t be affected by Intimidate, for example.
I’m looking forward to the new games. I am hoping to get my hands on Pokémon Sun, as I like Solgaleo. I prefer it’s ability, and I also prefer it’s look. The typeset of each Pokémon also looks nice, as I don’t often play Psychic, and am looking forward to doing so.
Thanks for reading!
What game will you get? Feel free to comment below!
Advertisement