Having used Things 3 for years, I finally decided to give another task manager a go – using my phone to manage all my tasks was getting pretty clunky, and I wanted something that I could access on my laptop and desktop too.

The most important thing for me in a task manager is the ability to not only set due dates, but to schedule those tasks. For example, I want to be able to have a task such as ‘write essay’, and have it in my today list without losing the due date. This ruled out Todoist for me – I really like the app but it does not have this essential feature.

I found Nirvana – an app fairly similar to Things, and it had everything I needed – cross platform support so I could use it on all my devices, the ability to schedule and have a due date, and sorting features. In this review, I’ll go through Nirvana’s main features, as well as things I like and dislike about the app. 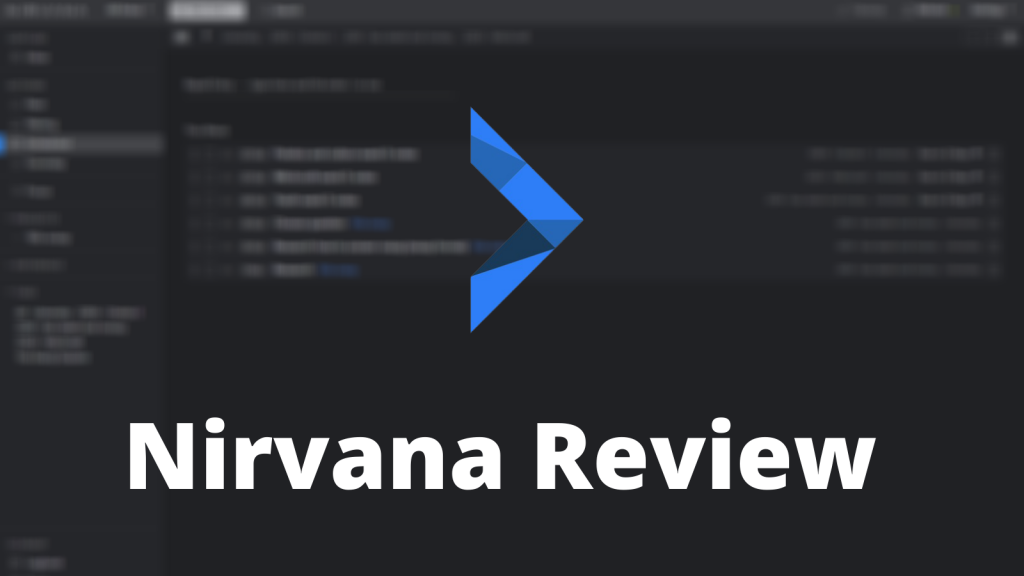 Nirvana has the typical layout of a task manager – sections, projects, and the like on the left hand panel. On the right you’ll be able to see your tasks, where you can assign various filters such as tags and areas, set due dates, and schedule the tasks.

Creating tasks in Nirvana is fairly simple – just click, or on phone, tap the New Item button and you can add a task in your current view or in the inbox. On the desktop/web apps you can also enable rapid entry, which will enable you to quickly make tasks by hitting enter.

My main issue with creating tasks in Nirvana is setting up the tags, areas, due dates and schedules for those tasks. The ability to select multiple tasks and right click to set these items does make it a little less painful – however for each individual task, sometimes you have to go in and manually add various details which can get quite repetitive and tedious for a large number of tasks.

This, along with the inability for notifications, leads me to believe that Nirvana is great for large projects and work tasks, but not great for smaller tasks such as cleaning or repeating tasks (Nirvan can support repeating tasks, however cannot deliver reminders for them).

You can optionally add a rapid entry panel on the desktop apps/web, however you still have to go through and either manually select all tasks and go through the dropdown menus to assign various filters, or do this individually if there are many different tasks. Nirvana allows you to Shift + click which does make it a little less of a pain, however it is still quite clunky.

The left panel of Nirvana shows you your actions, projects, reference lists, and tags. In actions, Next is essentially the ‘Today’ view of the app. In here, you’ll be able to see tasks that you have scheduled for the day, as well as tasks that are due tomorrow or today (I’ll talk a little about this later – I really like how Nirvana handles due dates).

Below Next, you have Waiting – here you can move tasks that are waiting on other people before they can be completed. You can assign contacts to these tasks in order to track which tasks are waiting on who. I do wish there was a way to hide this option – I have no use for it so it would be nice to get rid of it.

Scheduled shows a list of tasks that you have scheduled, sorted by weeks. This keeps it uncluttered, and it’s still easy to tell when tasks are scheduled as the date is given in front of the task title.

Finally, Someday is for tasks that have no date, for example trivial things that you want to eventually get done.

Focus is a more dynamic area – you can manually add tags here, but Nirvana will automatically star tasks that are due tomorrow or today, moving them into your focus area automatically. To add, when a task is due, the checkbox will be outlined with red and you’ll get a red number in the Focus area along with the grey number for manually added tasks and tasks due for tomorrow.

You can drag and drop tasks into these areas, which makes it quite a bit easier to schedule and manage them. Unfortunately, you cannot drag and drop tasks onto tags or into areas which make the process of further sorting them a little clunky, as you have to manually add them in the input menu.

Below actions, you have projects. These are essentially large tasks with multiple subtasks, and are a useful way to sort projects such as essays and the like. You can add notes the the tasks underneath the project, but you can’t add notes to the project. You can tag the project, which will automatically tag every task you create under it, and you can then assign tags manually to each item if you want. A due date can also be set for the project itself, and you can schedule it too.

Projects have a few more options with sorting hidden away – you can set it to be a sequential project, or a parallel project. A sequential project allows you to manually sort your tasks, so you can drag and drop tasks above others. On the other hand, a parallel project sorts them automatically by scheduled date. On the top right, you can select whether or not you want note previews on tasks. Projects are fairly nicely handled in Nirvana, and I don’t really have any complaints regarding them – it would be nice to be able to add notes to the project itself, but other than that I have no complaints.

Nirvana has the option to add Reference lists too – this is a feature I don’t use, and I don’t plan to use. Essentially, you can make permanent lists, such as favourite quotes or contact information. I have no plans to use this, and would prefer to see permanent projects instead – the ability to have areas for each subject would be far more useful for me than reference lists.

Finally, the Tags section. This shows tags, as well as areas, which allows you to sort your list further (you can also change areas by clicking at the top right of the left hand pane). This makes it easily to quickly find tasks you want – I use this to sort by subject, and to make switching areas easier rather than switching up at the top.

This section makes it quick and easy to further refine tasks in Nirvana, and sort through to see the ones you want to.

In the cleanup section, you have two items – Logbook, and Trash.

The Logbook is where all your completed tasks go – once you check a task off, it will disappear in a ‘Done’ tab at the bottom of the section you are in – you can then click the top right, which says ‘Cleanup’ to move this item to the Logbook.

Trash contains all the deleted tasks – you can go in here to restore them or permanently delete them.

I’ve mainly looked at the desktop experience in this review. I’ll go over the mobile experience a little here. As I have mentioned, I see Nirvana as a more sit down and see what I have to do task manager – rather than one to remind me to do a quick task. As such, I don’t use it on mobile much.

The experience on mobile is much more modern than the web and desktop counterparts. Tapping the top of the app allows you to quickly switch what areas you are in, and you can easily add tasks by hitting the plus button. The app has both light and dark mode, and you can choose one of these or set it to use whatever your phone is using at that time.

Adding a task allows you to quickly tag, add notes, as well as assign due dates, areas, and more to it. It’s a little more streamlined that sorting out tasks on desktop, but still is a little clunky as you have to do a few taps to add various elements to the task.

The mobile app is certainly nice, however as a mainly desktop user I find I use it very little. However, it is there and it does the job very well. If you want to use Nirvana on your iOS or Android device, you’ll be glad to know that the app is very up to the task.

There are a few things that could be improved/are missing from Nirvana. The most important of these is reminders – you cannot set a task to give a reminder off at a certain time, which means Nirvana is more suited to larger tasks instead of day to day things – you open the app when you want to work, not have the app remind you to work.

To add, setting various parameters of the task is quite clunky. Setting tags, areas, due dates and schedules for a task can take quite a bit of time, so natural language input would be a very helpful addition to make adding various things to the task smoother.

I also wish areas were reworked to be more similar to Things – it’s a bit clunky changing between areas, and I think that having the areas in the sidebar would make it a lot more clear which projects and tasks belong to which areas.

In my opinion, the biggest downfall of Nirvana is the somewhat clunky interface. It makes it a little more difficult to manage tasks, and if the interface was improved, it would make the app much more streamlined to use. The change of reference lists to something like permanent projects, or areas like Things handles it, would also be very welcome.

Nirvana offers two tiers – a basic tier, and the paid tier of pro. The basic tier is pretty limited – only one project, area, and limitations on various other aspects of the app. The pricing for Nirvana Pro is as follows:

I’m really glad that Nirvana gives you the option to do a one time payment for the program – I’ve never been a fan of subscription for software so it’s nice to be able to buy it outright.

The support replied quickly to my email, which shows that the people behind the app are there. It also has been recently updated on the App Store.

I like Nirvana – there are certainly things that aren’t as great as its competitors, such as Todoist, and it’s a little clunkier than Things, however it’s the only cross platform app that allows you to set both a due date, and schedule a task – something that is vital for me. Unfortunately, for me, the interface is just too clunky. It takes too many clicks to add a task, and I usually want to get one added quick so I can get back to doing something more useful. As a result, I am still looking for the task manager that suits my needs best.