The gap between the release of Things 1 to Things 2, which was four years, may have deterred some customers from the app. The gap between the latest update and Things 3 has been even longer. However, Cultured Code continue to update their apps with new features that are brought into iOS, such as widgets. Things 3 has brought a ton of features to the app, and is sure to attract both new and old customers. 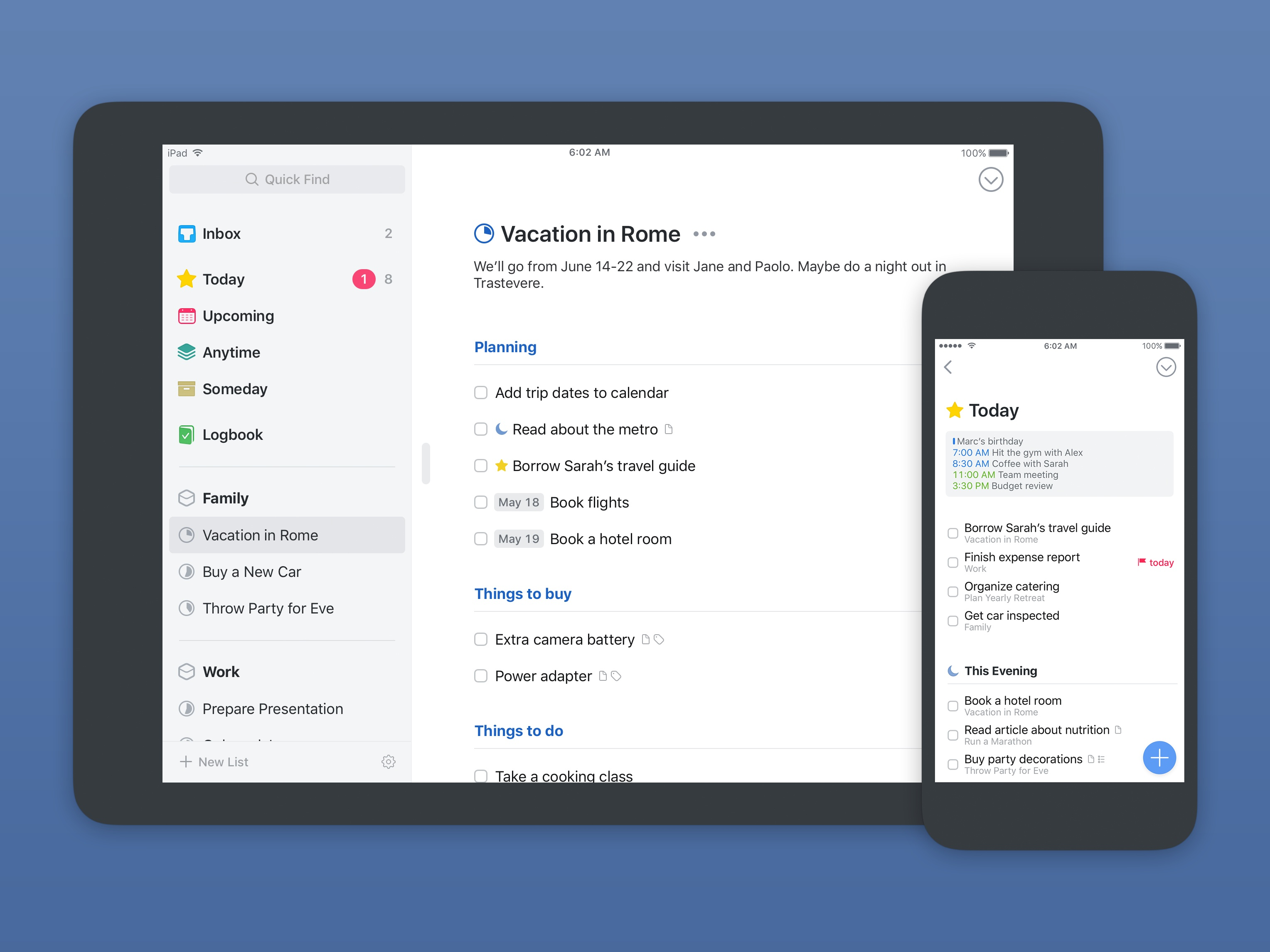 Things 3 has a new way of adding tasks – with a bold plus button. However, this plus button can be dragged around to add tasks in certain places. For example, you can hold down on the plus button and drag it to a certain date to schedule that task for that date, or you can drag it into a certain place into a project. If you want to quickly add a task to the Inbox, you can drag it over a bubble that allows you to add it to the Inbox. I really like the plus button, as the dragging and dropping allows you to easily and quickly add tasks to where you want them.

If you need to quickly add a task to Things, the Inbox is a place to dump your tasks, and then sort them out later. You can either drag the plus button to the Inbox bubble, or just make a task in the Inbox. Then, schedule, tag, and move it later.

My favourite feature of Things is in scheduling the tasks. It’s what really sets Things apart from other task managers. With Things, I can set both a deadline – a date when the task has to be completed by – and a schedule date – the day I want to complete it. This lets me preserve the due date of a task, but have it appear in my Today tab on the day I want to do it. With other task managers, such as Todoist, you have to set the due date as today. The problem with this is you may not do it that day, and then forget when its due. Things sorts this by allowing you to set a deadline for a task, but schedule it for the day you want to do it.

For example, if you are given a piece of work to complete in two weeks time, you’ll probably want to complete it before that time. With Things 3, the deadline can be set to the day the work is due in, however you can schedule the work to show up in your Today view at an earlier date.

In the picture below, I’ve been set an essay about Stalin that is due in five days. However, I don’t want to do it at the last moment, so I’ve scheduled to do it this evening. 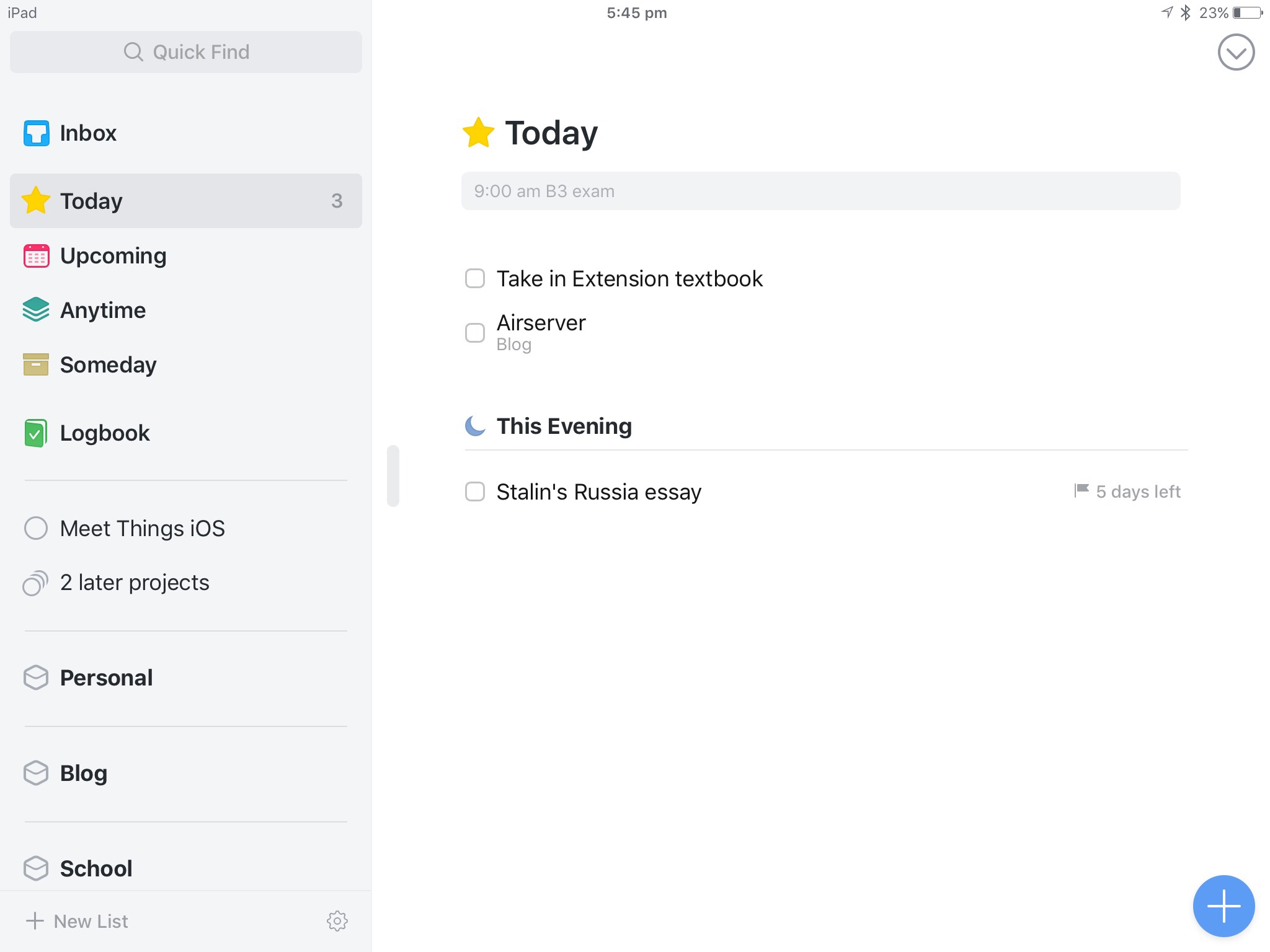 Projects can also have deadlines, and you can also schedule them too.

If you only set a deadline for a task, and you don’t schedule it, the task will be scheduled for the day the deadline is set. On that day, it will appear into your Today with a red flag, and your Today view will have a red dot with the number of tasks that are due or overdue, along with the normal amount of tasks in that view.

The ability to set both the deadline of a task, and then the date I want to do it is my favourite feature of Things 3, and its a feature that sets Things apart from any other task app.

Let’s go a little more into scheduling, which is another great feature of Things. Scheduling allows you to plan which days you want to do a task. There are four views – Today, Upcoming, Anytime and Someday.

Today is the view where you can see all of the tasks that you have scheduled for the current day, as well as tasks that are overdue. Overdue tasks have a red flag, so you’ll be able to see them easily. Tasks that have been scheduled for the current day will also appear in the Today view, and Things will tell you how many tasks have been added from the schedule.

The Today view also allows you to add tasks for the evening, which adds further organisation to your day.

Upcoming is another important section of Things. In Upcoming, you can schedule your tasks for certain dates. You can do this by dragging the plus button, and you can also schedule tasks in the view. Tasks with deadlines also appear there.

Anytime is a section that is there for you to add tasks that have no deadline, but you want to get them done. These are tasks that also have no schedule, so you don’t put them in the schedule view.

Finally, Someday is a section where you place tasks that you want to get around to eventually, when you have nothing else to do.

If you want to view all your completed tasks, the Logbook is useful for that. Tasks are sorted by the last task being at the top, so if you accidentally ticked a task and you didn’t mean to, you can go back in untick it. The logbook is also a good way to see what you have gotten done in a day.

Tasks can also be repeated. You can select day intervals, weekly and many more that you often find in task managers. You can also set a reminder for a task that will give you a push notification at the time set. Sadly, location-based reminders are not yet available – something I would love to see added.

Subtasks are another new addition to Things 3. When you make a task, you can add multiple subtasks. Things 3 also allows you to convert that task and all of its subtasks into a project, which is a really handy feature. 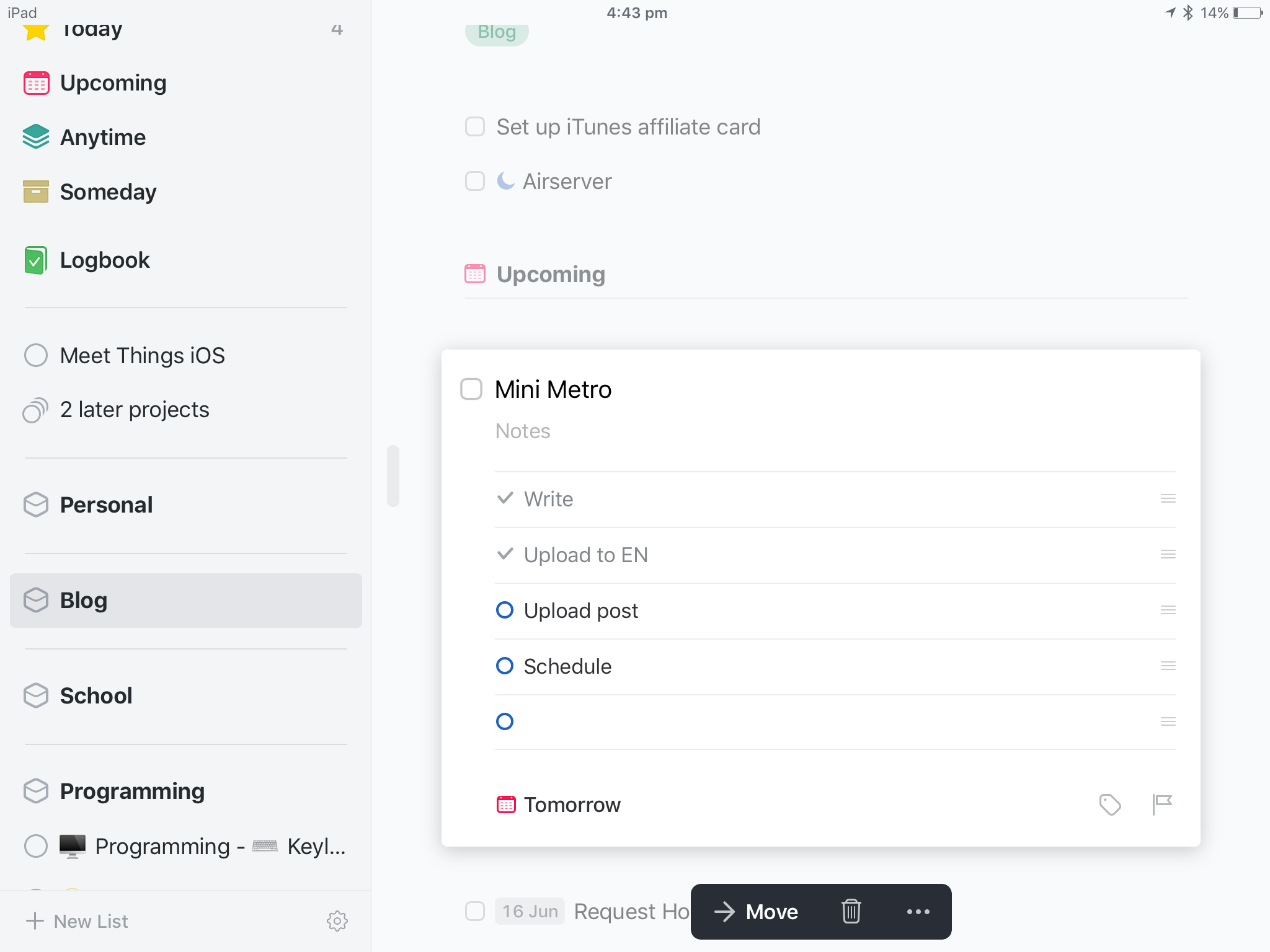 If you have an irrelevant task, holding down on the check box allows you to cancel that task. It’s a nice feature as the task shows up as cancelled in your logbook too.

A major feature of Things 3 are projects. Projects allow you to easily organise large ongoing projects in your life – for example, a presentation from work, or planning a holiday. Next to the project title, a circle is shown, and this fills as you complete tasks in that project, allowing you to easily see how complete the project is. Project descriptions can be added at the top, and this lets you put an important note or link at the top so you won’t forget it. Headings can be added to split the project up into parts, so you can work through each section. Once you’ve completed a task in that project, you’ll be able to find the completed tasks in a section at the bottom of the project so you can quickly see what you have accomplished related to that project. 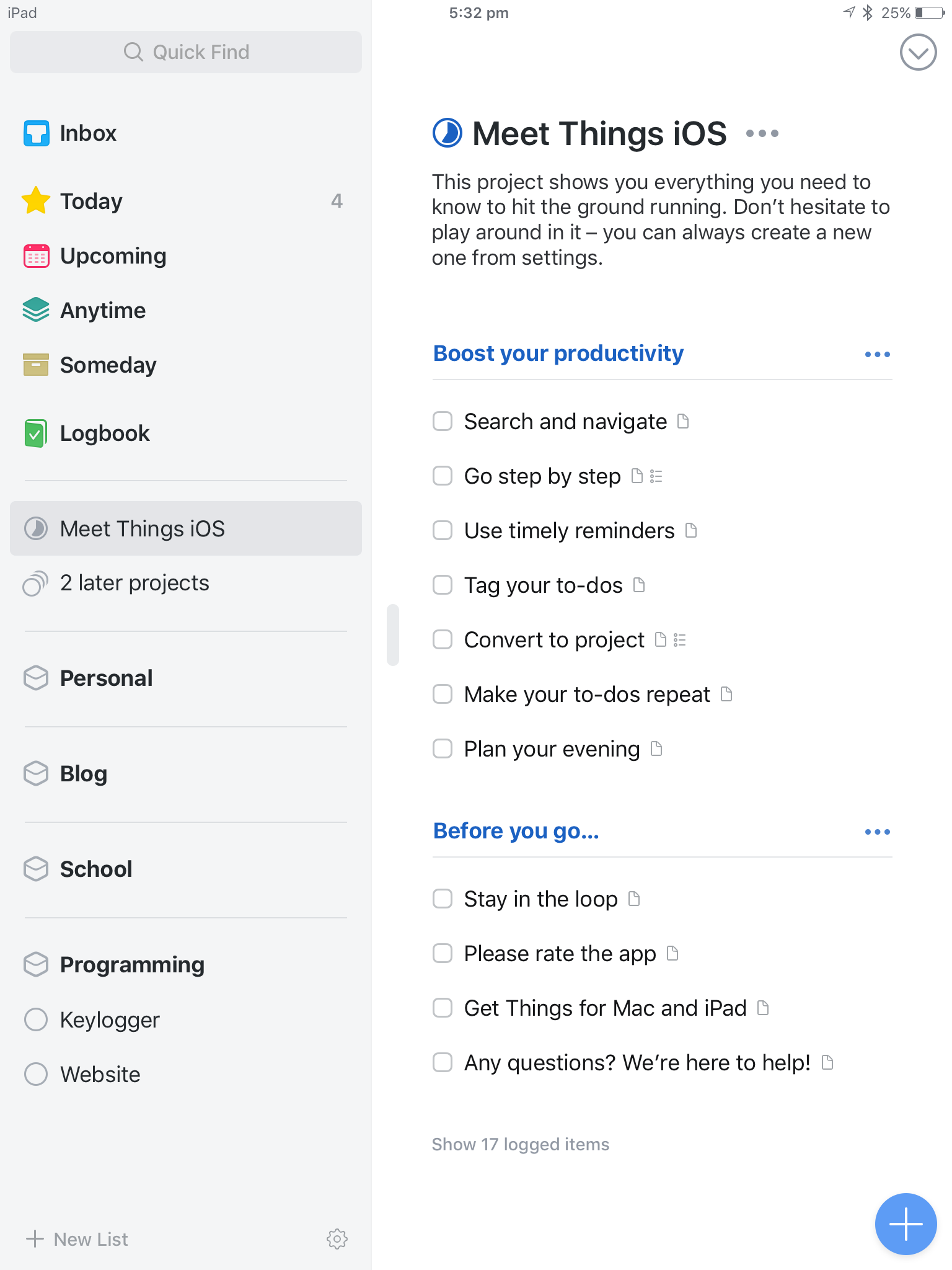 Projects can also be scheduled – if you do so, Things hides them in an area below all the active projects, so they don’t clutter up your view. You can also give deadlines to projects, which is handy, and tasks inside the project can still be individually scheduled.

Another important feature of things is Areas. Areas are places where you put tasks that are related to each other. Note that Areas are different from projects – a project is for a temporary aspect of your life, such as that holiday, and Areas are for a permanent aspect of your life, such as work. Areas cannot be finished, and have no ending date. For example, I have a ‘School’ area where I place all the tasks that relate to school. Things 3 also allows you to add projects to Areas, so I have projects that relate to School in that area.

There are lots of power user features that may interest people who want more out of their task application. You can connect Things to the iOS calendar to show your events inline with Things. In Today, you will see the calendar events you have with the starting time, and once the event has completed, it greys out. Events can also be seen in the upcoming section.

For Siri users, you can enable Siri in the Things 3 settings that allows you to use Reminders as a step to adding tasks in Siri. You set the reminders list you want Things to use, and then you ask Siri to remind you to do something: Remind me to pick up the milk. This reminder then gets added to Reminders. Things 3 detects that a new task has been made, and imports that task into the Inbox. It’s quite a clumsy way to add tasks, but it does work. I’d like to see native Siri support added to Things 3 in the future.

You can use an action extension to quickly make tasks from other apps. For example, if you are browsing a webpage, and you want to add it as a reminder to Things, you can tap on the share sheet and select Things. The website title is added as the task title, and the link is added as the task note along with a quick page summary. A Today widget also comes with Things, so you can quickly view, complete and add tasks to the app.

Tags allow you to further organise your tasks. I like to use tags to define places where I have to be to complete a task – for example ‘home’ – and I also use them to define how important a task is. You can add tags by selecting the tag button that is beneath a task.

Things 3 offers Things Cloud, a free service that allows you to sync your tasks across multiple devices. It’s amazingly quick, and it only takes a task around a second to show up on a second device when a new task was added to another device. It’s very reliable and quick.

Coming over from Todoist or Wunderlist? Things 3 has importers that work with both of those apps to import tasks from them, as well as projects, deadlines and more.

I’ve loved using Things 3, and its a great app. I’d love to see a Windows app, or at least a simple web app that allowed me to add tasks from other computers. This is my main reason I’m not moving over to Things – I can’t add tasks from my Windows computers, nor the computers at school. Location reminders are also not a feature in Things, which is a pity as they are very useful. I also missed the natural language input in the title after using Todoist for a while, which I would love to see added. However, natural language input is allowed in the schedule view, which is useful. External keyboard shortcuts on iOS also need to be added – there were a few in Things 2, so its strange that there are not any in the new Things. I’d love to see some added to make adding tasks easier with an external keyboard.

I really recommend Things 3 to those looking for a task app that works on their Apple devices. It’s beautiful, quick and powerful, and will fill the needs of many people who are looking for a task manager app. Things 3 is available to purchase separately for each platform.