NordVPN is one of the more well known options for VPNs. Well-known for it’s high speeds, high amounts of features, and a no-log policy, NordVPN is a great option for those who want a privacy focused, yet fast VPN. At time of writing, NordVPN has 5494 servers, based in 60 countries – allowing you to connect close by you, increasing speed, and using servers with less load.

In this review, we’ll be taking a look at performance, privacy features, and various other features such as specialist servers such as P2P and double VPN. 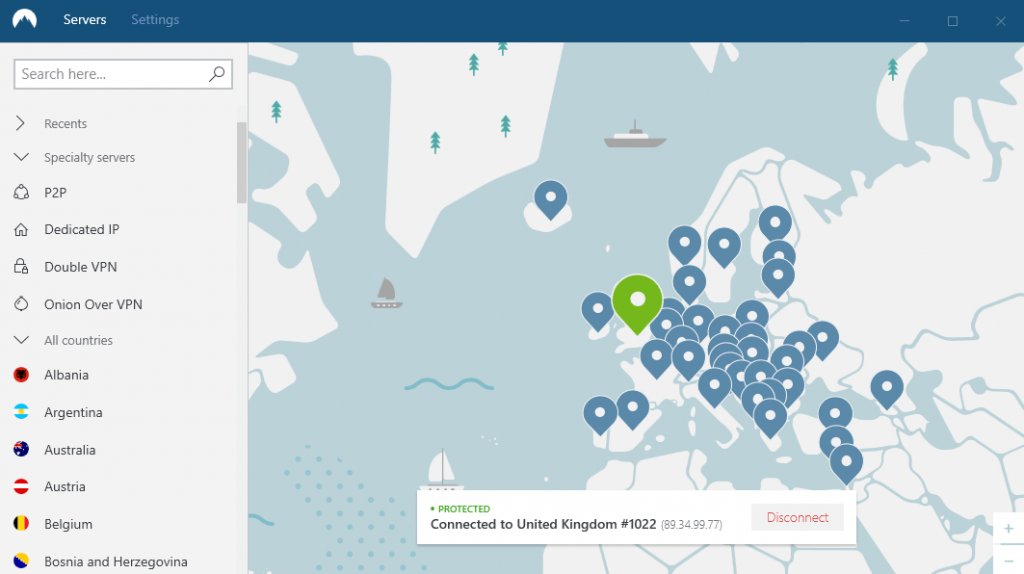 One thing to note right off the bat is that NordVPN does not offer a free service – it is a completely paid VPN. This offers the advantage of the servers being less crowded, as well as a more premium service.

NordVPN offer multiple premium features that you’ll struggle to find on other VPNs.

For connecting, NordVPN offers both TCP and UDP, via the OpenVPN protocol, with AES-256 encryption. UDP is the default – it’s the quicker of the two protocols – however you can change which one you use. One thing to note is that the Tor network cannot be accessed via UDP. However, NordVPN allows you to connect to specialty servers for this, meaning you don’t have to change settings.

A note for those interested in using NordVPN for P2P – it does not support port forwarding.

They do log less important information, such as server performance, allowing the best server for you to be chosen, email addresses, and payment data (Bitcoin is an option).

It’s clear that NordVPN takes privacy seriously. This is supported by their physical location – being located in Panama, allowing them to avoid data retention laws that are in force in other countries.

NordVPN is also incredibly quick. Despite my normal connection being slow, using NordVPN had no impact on speed. I’ve found with previous VPNs that the internet was so slow it was nearly unusable – however, with NordVPN, that is not the case. The servers are very quick.

The above speed is without NordVPN enabled, with a 20 Mbps connection. When enabling a standard server in the UK, the following was the speed:

As you can see, the impact on using NordVPN is incredibly small – with only a drop of .93 Mbps.

When testing for IP and DNS leaks, NordVPN performed well – nothing was leaked. With less trustworthy VPN providers, occasionally your IP or DNS is leaked when making queries, however this was not an issue with NordVPN. Using various tests, NordVPN never leaked – you can be confident that NordVPN won’t leak your real IP or DNS.

So, the cons. I’m not the biggest fan of the interface – it’s mostly filled with a map, which isn’t that helpful. Whilst you can search for servers, I would prefer to see the interface put to better use rather than showing a map.

I did have an issue with the support – NordVPN was disrupting my Windows 10 hotspot – the nordvpn-service disrupted the connection, even with the VPN disabled – stopping it fixed the issue, or enabling NordVPN on connecting devices also fixed the issue. However, support curtly told me that it had nothing to do with NordVPN. However, for other matters they responded well. Other than that, I have experienced no issues with NordVPN, and have had a great time using it.

NordVPN offers various plans of different lengths and prices, and all plans can be refunded within 30 days of being bought. These plans can be bought with credit card, or other methods such as cryptocurrencies and AliPay. All the plans offer the same features. Whilst the initial purchase is cheap, following subscriptions are charged at full price, so NordVPN gets more expensive when you renew – keep this in mind.

To conclude, NordVPN is the best VPN I have used. It’s fast, has a great privacy policy, and offers thousands of servers. Connections are reliable – I haven’t had NordVPN drop – and they don’t have upselling plans. If you are looking for a premium VPN, at an incredibly affordable price (for the three year plan), you won’t go wrong with NordVPN.