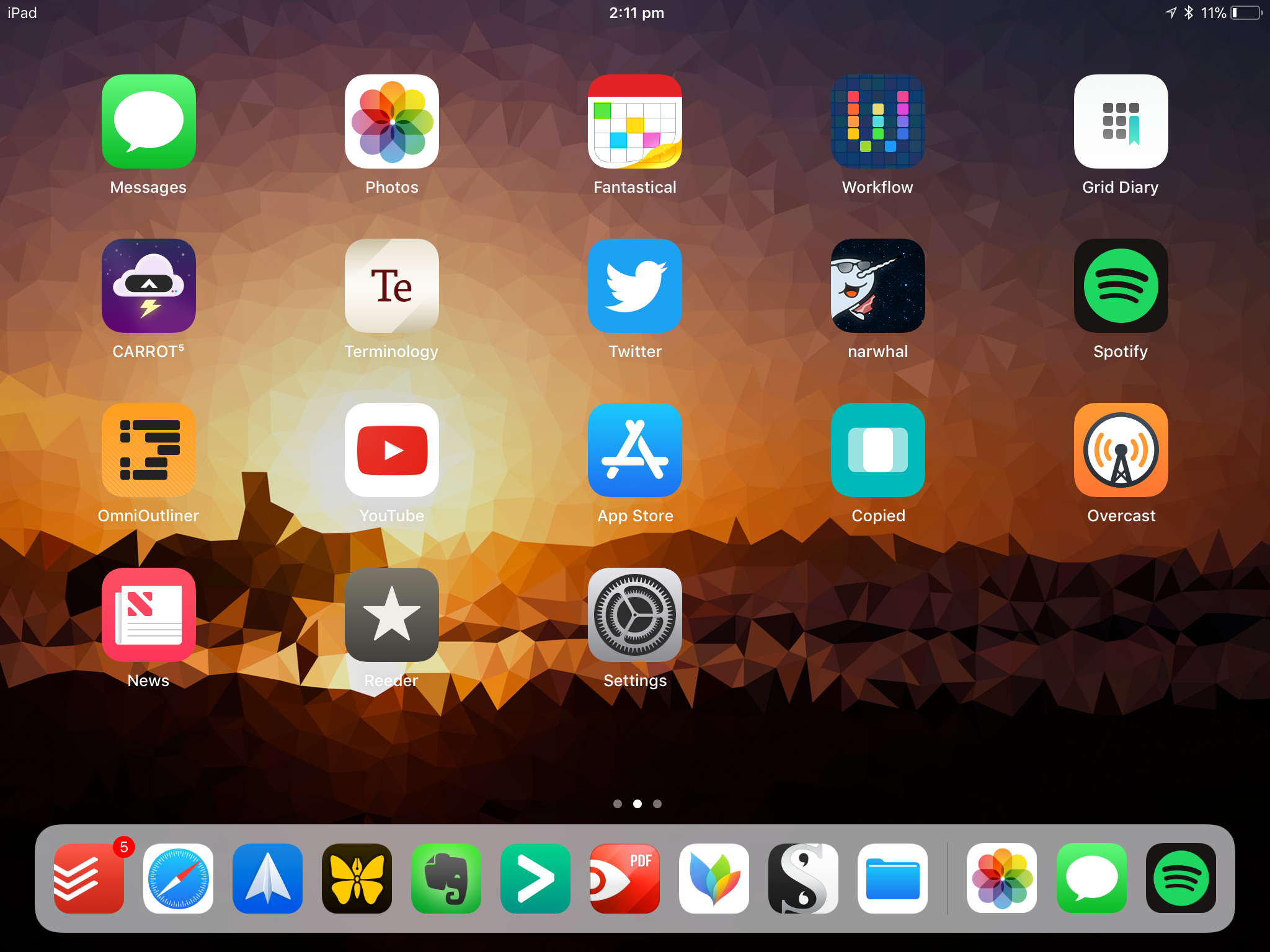 I’d thought I would share my iPad home screen. I’m currently on the iOS 11 beta, so I’ve got my most used apps in the dock. I’m also using an iPad Air 2, so I can thirteen apps in the dock (excluding the three suggested apps). The apps are listed by row, left to right on landscape mode.

Want to know more about iOS 11 on iPad? Check out this post with all the best iPad features in iOS 11.

The first app is iMessages. I left this where it was when I first got my iPad, and I do use it occasionally to message friends and for group chats. However I use Facebook Messenger more as it isn’t iOS specific.

The next app is Photos. iCloud syncs my photo library between my phone and my iPad, however I use it mostly for the tons of screenshots I take each day.

Fantastical is my calendar app of choice. I love the widget it has in the Today view for easy event viewing, and the natural language input on it is amazing. I also like the day ticker/week view feature.

Workflow is an amazing app that I use so much. It lets me completely automate my iPad so that tasks which usually take three or fours steps to do simply require me to tap once and complete them. I won’t go into it too much as I’ve written loads of posts on it, so be sure to check them out.

Grid Diary is my finally app on this row, on the top right of my home screen. This gives me easy access to the app. I’ve started using to journal as it’s really easy to quickly fill out each day, and I like the stats that show you weather and mood trends. Another cool feature is the memories feature, which shows you entries form a week ago, a month ago and so on.

My second row starts with Carrot Weather. I’ve been using it for ages, but the latest update released was amazing, and I really like that now I can use Weather Underground as my weather source as it’s a lot more accurate than Darksky in Europe. I like the Carrot has great information on the weather, but it also has a funny streak with the ai that makes checking the weather a lot more fun.

I recently added Terminology to my home screen as I had moved many apps from my home screen to the iOS 11 dock. I did this because I look up word meanings quite a lot throughout the day, and Terminology is a great dictionary app. I also like that I can favourite words so I can easily find the meaning again. I’ve also started writing my novel, so it’s handy to have to look up better vocabulary to use.

Twitter is my favourite social media, and I use the official Twitter app. I tried out Tweetbot and Twitteriffic, but I found that they didn’t really offer anything above the normal Twitter app. I’m on Twitter quite a lot throughout the day, so Twitter is on my home screen for easy access. I didn’t add it to my dock as that would lead to getting distracted much too easily.

I also love Reddit, and the offical iOS Reddit client isn’t the worlds best app. Narwhal is an awesome Reddit app that not only looks great, but works great. I can easily add subreddits to the sidebar for easy access, and upvoting things is a breeze. I can access all the features of Reddit that you can access on the Reddit website. A cool feature of Narwhal is that you can change the app icon from the default one, and night mode is very easy to toggle.

I don’t listen to music much, but when I do I usually use Spotify. I don’t have a subscription because I don’t use it enough, so I need to be online to use it. I like Spotify as I can access it across all operating systems, and it has all the best songs on it so it keeps me happy.

For larger pieces of writing I do, whether for an essay or for a blog post, I like the outline it. This gives me an easy structure I can follow. I use Omnioutliner to make my outlines – it’s so powerful, and I only use a tiny bit of its features. Changing the look of an outline is very easy, and you can also add columns such as checklists to mark off what you have written and where you are in your outline.

I visit the App Store everyday, to find new apps and also to update my current ones. I’m not that a big fan of the new App Store – it’s harder to find what I want, and I want to be able to see more apps on the App Store homepage, not just a few. However it is nice to see what are some truly great apps, and I guess it exposes the apps that are shown a lot more.

Copied is an awesome clipboard manager. I use the Today view widget a lot, however I like having the app handy if I want to search for something I saved in it or make a new snippet in a list. Another reason I have it on the home screen as now in iOS 11 when swiping down, it takes you to notification first and not the Today view1, which is a little annoying as it’s an extra swipe.

Overcast is the reason I don’t listen to much music – I listen to podcasts instead. I listen to a variety of podcasts but most are about tech. I like the smart speed on Overcast as well as the voice boost, and its a really nice app that I enjoy using everyday on my commute.

Another news app I use is Reeder, but this is an RSS reader so it’s more tuned in to my interests. I use it with Feedly as it allows me to easily save articles to Evernote and other places, and it looks great.

Settings is the final app on my home screen. I go into it quite a lot to sort out certain things with my iPad.

My dock isn’t full at the moment – I can still fit three more apps into it. However, I don’t really need to put more apps into it, and it’s already small enough (especially in portrait mode). It will change overtime, as I’m currently writing a novel, so it’s got some apps I use for writing novels in it.

The first app is Todoist – I use Todoist for all my tasks, as it syncs really quickly and I can get it on Windows and Android. The karma feature is also cool as I love stats. I have it on the left of my dock for easy and quick access, as I use it a lot everyday.

Safari is next. I use Safari over other third party apps such as Chrome because whenever I tap on a link, it launches in Safari. I also like Safari and it’s interface, so I stick with it.

I use email a lot, and Spark is my email client on my iPad. It doesn’t have any amazing and revolutionary features, but I like it as it’s simple and neat, and it has integration with Evernote so I can easily save emails. It also has folder shortcuts, which are very useful.

Ulysses is the app I probably use most on my iPad. I use it to write every single one of my articles, and I publish them directly from Ulysses. I also use Ulysses for most of my long form writing such as essays. It’s a really great app, and I really love using it every day.

Of course, Evernote, another app I use so much is in my dock. I’ve written about it loads, so I won’t go into it too much, but I use it to take all my notes, research, scans and more in one place.

I’ve recently started to improve my Python programming, and I now do it at school, so I bought Pythonista for my iPad. It allows me to run Python scripts on iOS, as well as have a console. It also has iOS specific modules that allow for easy iOS automation and programming.

PDF Expert 6 is where I store my press kits and PDFs when I need them. I use it quite a bit, so its handy to have it in the bottom bar for when I need it.

MindNode is one I recently moved down there, as I used it to plan my novel before exporting it as an outline to Omnioutliner. I also use it for planning locations and characters for my novel. I occasionally plan articles in it, but I prefer the structure of an outline for those.

Scrivener is an amazing app for writing a book, and it’s moved down to my dock as I’m in it for hours a day, planning and writing my novel. It also syncs over Dropbox to my phone and computer, so I can even write when I’m on the go, and resume it on my computer.

I’m a big user of iCloud, so I have Files in my dock so I can quickly access my iCloud files. It also syncs in with other apps such as Working Copy, but it doesn’t work too well with them as they have yet to be updated for iOS 11 and compatibility with Files.

That’s my home screen! The three apps you see to the right are suggested apps – they change as I open and use apps, and show my most recent three apps.

I’m quite impressed with iOS 11 so far, especially with the dock and drag and drop. If you want to find out more about iOS 11, check out my look at iOS 11 on the iPad. 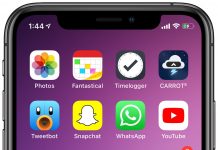