It’s been around six months since I did the last post on my iPhone home screen. I’ve changed some of the apps on the home screen, along with the background that I use. It’s also changed from being a one page layout to a two page one, in order to be more practical. 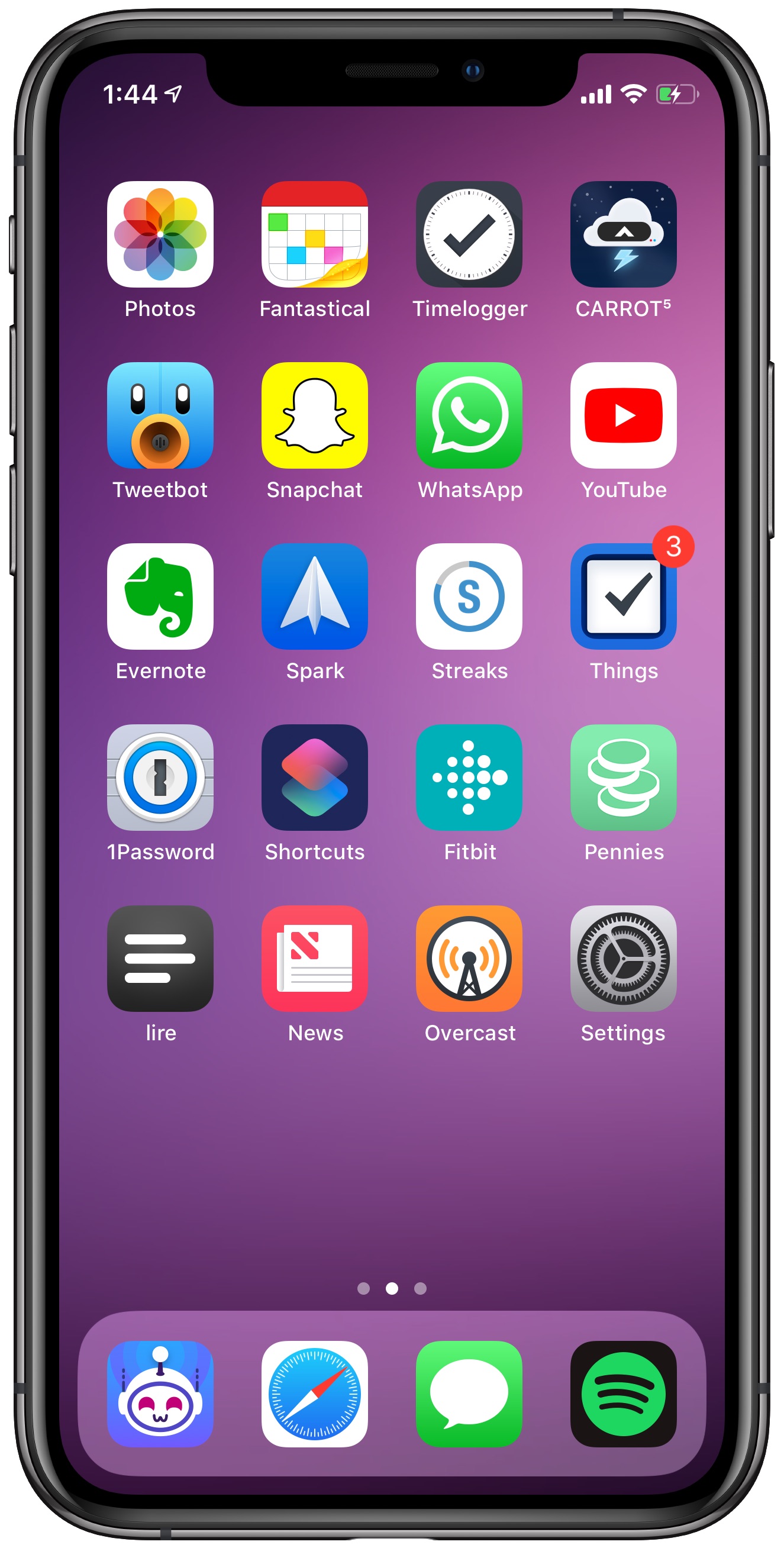 I’ve started using this gradient purple wallpaper that can be found here.

Photos is still up there in the same spot since I got my phone – I access it a lot, and I like it where it is.

Fantastical is next – I used to have the camera app here, however I usually access that from the lock screen or control centre, so I moved it to free up some space on the phone. Fantastical is my calendar app that I use, however I do wish that it had a week view that I could access on portrait mode. I do, however, love the compact widget.

I’ve started using Timelogger more recently to log my time and see where it went. With it’s powerful widget and stats, Timelogger makes it easy to start a timer, and also view where your time has been going win in depth statistics. It also syncs to my iPad, so I can view it on whatever device.

Carrot Weather has been the weather app I’ve been using since release. It’s funny, and it also has a great interface that gives me all the information about the weather I want. It has a great widget, and also is constantly updated to always support the latest that iOS offers.

Tweetbot is my favourite Twitter client – I like the simple interface, and that it doesn’t slip in ads between the tweets. However, with the recent Twitter API changes, it doesn’t give notifications reliably, and also doesn’t have tweet streaming. It’s a pity that Twitter is try to cripple third party apps to force users over to theirs.

A few social media apps come next, with Snapchat leading the way, then followed my WhatsApp. Then, YouTube, which I use quite often to watch videos from my subscriptions.

On this row it is mostly productivity apps, started off with Evernote – a service I’ve been using for around five years. I keep all my notes in Evernote, and love that it can sync to any of devices regardless the platform they are on. All my notes from school are in it, along with many research notes, information about this blog, and so much more.

Spark is my favourite email client. Whilst it may not have all the features that others boast, it was the only one that worked straight away, and the one that delivered consistent notifications. It works well, and it also syncs signatures across devices and allows you to change the default for each account.

I recently started using Streaks to track my habits. Streaks works off allowing you to mark an activity as done, and complete it every day in order to start a streak for that activity. I’ve written about it in detail in my review here.

Finally, Things is still my task manager. It’s powerful but has a great interface, and most importantly, allows me to both schedule, and set a deadline for a task – I find this works great for me, and I always complete work in time with this. I have a huge review on Things here, and I also go into more detail about how I use it in this post.

1Password is what I use to manage my passwords – it allows them to be easily generated, and also integrates closely with iOS 12 so I can easily insert them. It also has a watchtower feature, which will tell me if I have to enable 2FA on any accounts, or if any accounts have been leaked and I need to change the password.

What used to be Workflow is now Shortcuts – and I’ve also written many posts about Shortcuts on this site. It’s an incredibly powerful app that allows you to visually program blocks into powerful actions, and I really recommend you get it if you want to get more use out of your iOS device. You can read more about Shortcuts here.

I purchased a Fitbit Charge 21 a few months ago, and therefore the Fitbit app made it’s way to the home screen. I really like the interface, and it’s a lot easier to view the data than Apple Health. This being said, I do wish that I could sync between Fitbit and Apple Health in order to take advantage of the integrations that iOS has with Apple Health.

If I want to read something, I usually open up Lire, which is the RSS client I use on iOS. I use Inoreader as the service, but I dislike the iOS app. I love that Lire fits in perfectly with iOS, and is simple so it doesn’t clutter me, but is powerful enough so I can read my feed, and filter through feeds. It’s best feature in my opinion is its full text extraction, which allows you to read feeds that usually have a read more button in full.

To see what is going on in the world, I open up Apple News. I like the app, and I often find an interesting article when I open it up, and it keeps me up to date with the world. You can also add this site to Apple News, and if you want to, you can click/tap this link to add it.

I listen to podcasts less that I used to (I purchased Spotify Premium), however I am trying to listen to them more. Overcast is the podcast app that I use, mainly for it’s silence shortening feature, which speeds up the podcast slightly in order to reduce silent moments. This is great as often a 30 minute podcast takes around 25 minutes to listen to, and it’s done so that the people speaking sound the same – in fact I never notice that it is on. Voice boost is also another excellent feature, allowing you to hear the person talking instead of just music drowning them out.

Finally, Settings is the last app, as I access it often in order to change network, check battery stats, etc.

This hasn’t changed since my phones first home screen – I still have Apollo (this time with a different icon), which is my favourite Reddit client, with a lot of customisation, and a better look than the official client.

I use Safari on iOS as it works well, and also everything opens in it – I would use Chrome, but it would be more of a hassle and I don’t think that it’s worth it. Messages is self explanatory.

Spotify is my music service – I would use Apple Music, but iTunes is a mess on Windows and I don’t want to put my computer through downloading and using it. I use Spotify mainly for the Windows app, however I also like the way it works on iOS, and the suggested playlists are good. I would, however, like to see iOS features adopted more quickly – such as Siri Shortcut implementation.

You can check out my previous iPhone home screen post here, or all of my home screens here.

Hopefully you found some interesting apps that you want to check out, and thanks for reading! 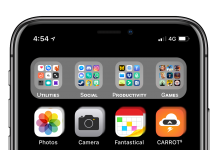