The Nerdy Student
Advertisement
Home Uncategorized TCG: Avalugg!
Avalugg is a Pokémon which was introduced in X and Y. It evolves from Bergmite, which is one of my favorite Pokémon! 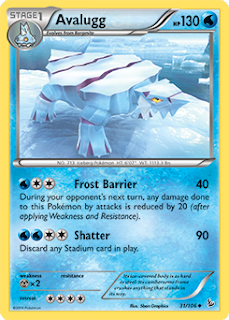 Avalugg comes from XY – Flashfire, and is number 31/106. Avalugg is uncommon.

It is weak to Metal type attacks. Any metal type moves on it will do double the damage.

Avalugg has two moves; Frost Barrier and Shatter, with the latter being the most powerful.
Frost Barrier requires one Water type energy and two Colourless energy. The great bit about his move is that 20 damage is reduced from your opponent’s next attack.
Avalugg’s most powerful move, Shatter, requires two Water type energies and two Colourless energies. Shatter does 90 damage, and it also discards any stadium card in play. This is great is your opponent has a energy healing stadium card out.
Avalugg is a great Pokémon, but its high retreat cost is a bit of a let down. Its moveset is very good though.
Thanks for reading!
Feel free to comment below!
Advertisement