The Nerdy Student
Advertisement
Marowak is a card not to be taken lightly. 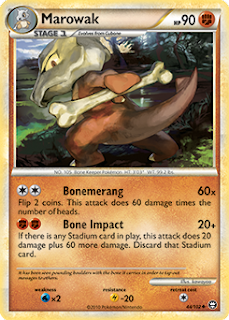 It has 90 HP, and two moves. It is weak to Water, and resistant to Electric type moves. Its retreat cost is one Colourless energy.

Bonemerang is Marowak most powerful move when there is no Stadium card in play. It does 60 damage, times the number of heads you get. So, if you’re lucky and you get two heads, the move does 120 damage.

So, you might want to consider adding Marowak to your deck.

Thanks for reading!
Feel free to comment below!
Advertisement