The Nerdy Student
Advertisement
Muk is a Pokémon that can add an edge to your card game. 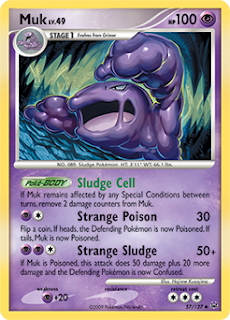 This version of the Muk is in the Platinum Series: 57/133. It is a uncommon card.

Muk is Lv. 49, and has a HP 100. It is weak to poison, and costs three energy cards of any type to retreat. To use Muk in your deck, you’ll need to obtain a Grimer.

Muk has two moves; Strange Poison and Strange Sludge. Both moves require at least one Poison energy card, and another energy card which can be anything. If you know how to use Muk properly, it could be a brilliant late game changer.

Muk’s first move is Strange Poison. It does 30 damage, and then a coin is flipped. If the coin lands on heads, your opponents Pokémon is poisoned. This means 10 health is subtracted every one of your opponents moves. If the coin lands on tails, Muk, your Pokémon, is poisoned. This may sound bad, but Muks Poké-Body will boost your health, and there is an even better advantage with having Muk poisioned.

Muk’s Poké-Body is Sludge Cell, which means that if Muk remains affected by any Special Conditions between turns, your remove two of the damage counters on Muk. This means that after your go, if Muk still has a special condition, you can remove 20 health from it. Therefore, it might be better having Muk poisoned then not poisoned.

Muk’s second move is Strange Sludge. This move does 50 damage, and does 20 more and confuses the opponents Pokémon if Muk is poisoned. Therefore, you might just want to have Muk poisoned.

All in all, Muk is a great Pokémon, and it’s even better poisoned! Muk is one of the Pokémon I included in my deck, and I would recommend that you try it out in your deck too!

What do you think about Muk, and what Pokémon card do want next? Feel free to day so in the comments below!