The Huion 1060 is a affordable drawing tablet designed for artists and graphic designers. With 8192 levels of pressure sensitivity, a 10 x 6.25″ drawing area, and multiple keyboard shortcut keys the Huion 1060 Plus offers an impressive package for an affordable price. 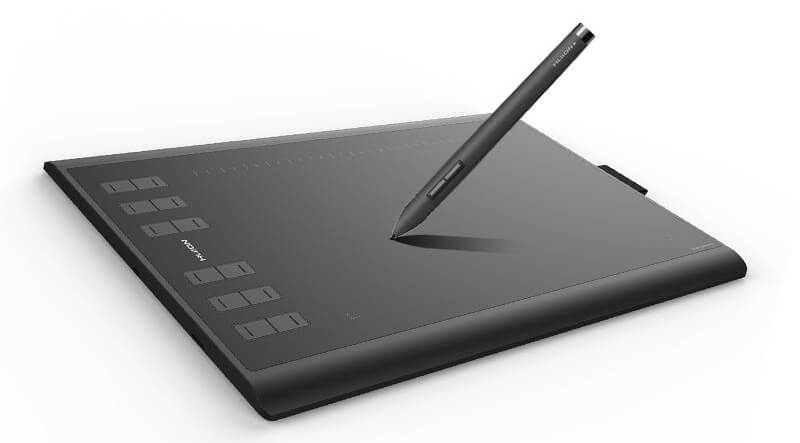 The package comes with the tablet, stylus, a stand for the stylus to sit on with spare tips and various cables that allow you to connect the tablet to your computer and charge the stylus. It also comes with an interchangeable micro-SD card, which is a nice touch, as it allows you to save art directly to the tablet if you want to carry it around. The micro-SD card also comes with drivers, but these are outdated – you’ll want to get the latest ones of the Huion website.

The tablet worked great in both Photoshop CS6 and the latest version of Clip Studio Paint, and I was able to set up shortcuts using the tablets 12 hard keys and 16 soft keys at the top. I would suggest exporting your settings in app and keeping a copy for when you update the drivers, which unfortunately resets the key settings. Exporting them allows you to easily import your prefered settings back into the app.

I like the attitude Huion has taken towards the stylus – instead of requiring separate batteries, you can plug it in to charge it, something that takes less than an hour in my experience. Regarding the quality of the stylus, it has some weight to it, but not enough to make it feel cumbersome. The plastic feels fine, not too cheap but certainly nothing special. The stylus features two shortcut buttons, which are nice for swapping pens in software or toggling the eraser. These buttons feel okay, but it would be nice to have some more stability to them, as they can wobble quite a bit.

In regards to drawing, it can take some getting used to if you haven’t used a tablet before. The surface is textured, giving a more paperlike feel. One disadvantage with the drawing experience for me was the slight sponginess in the pens nib, which is most likely to allow it to provide pressure sensitivity. Secondly, the liftoff distance after which the tablet doesn’t detect the pen was only around 3 centimetres. This isn’t too much of an issue after you get used to it, but it did make the drawing experience a little more difficult to get used to. After around 30 minutes of using the tablet, I was very happy with it.

The shortcut keys on the tablet work well. Using the latest driver version, I was easily able to assign them to complex shortcuts that I wanted to easily be able to trigger. The side keys also worked really well for moving the canvas around, as holding down and dragging with the the stylus was very intuitive. In regards to the soft keys, which are at the top of the tablet, I used them less, however they functioned as expected.

To conclude, the Huion 1060 Plus is a great choice for those who want to draw on a budget. The hotkeys work well, meaning you don’t have to keep reaching for your keyboard, and the stylus is accurate and comfortable. The software is easy to use, update, and control complex keyboard commands right onto the drawing tablet.

The Huion 1060 Plus can be purchased here.