If you own a website, you’ll know important speed is. That’s where BunnyCDN comes in – it allows you to serve assets and images from an ultrafast server, from 36 locations around the world. This allows you to save server load, and also dramatically speed up page render times.

Typically, content delivery networks (CDNs) are expensive. However, BunnyCDN only requires a minimum of $10 a year, and has two tiers – $10/TB, with more serving locations, and $5/TB, with slightly less serving locations. This means that BunnyCDN is not only very fast, but also very affordable.

What is a CDN?

Firstly, a CDN is a distributed network of servers which work together to provide the fast delivery of content. Typically, CDNs transfer asset files such as JavaScript and CSS, and images. CDNs speed up page time by caching content and having incredibly quick servers, and also allow users from all over the world to view pages quickly due to the distributed network of servers.

If you want to learn more about CDNs, this Cloudflare page is a good place to read more.

Speed is crucial when choosing a CDN. BunnyCDN performs very well, with an average of 5.5 ms connecting, and 30.06 ms for time to first byte (when content starts being served).

Without BunnyCDN, the results are below (server located in the USA): 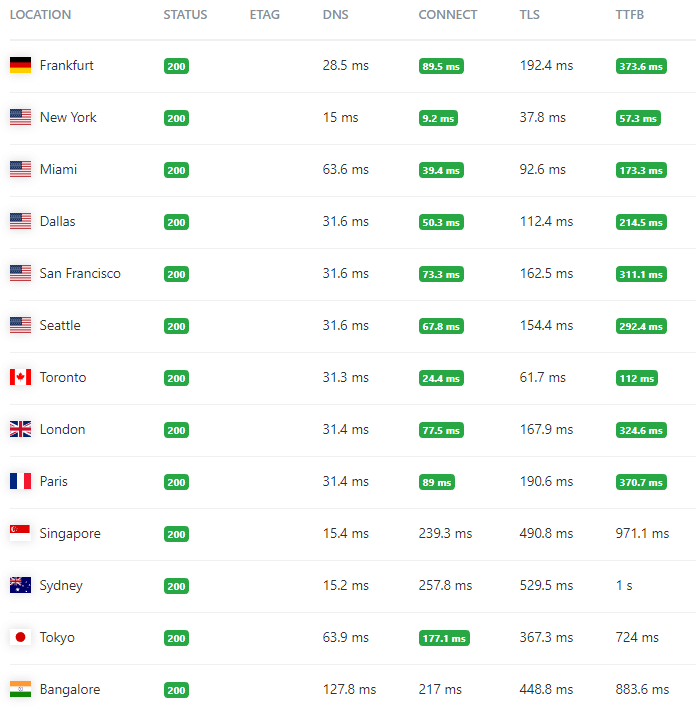 Clearly, BunnyCDN offers much greater speed – content is delivered at a much quicker speed.

Along with the typical high speed asset and image delivery, BunnyCDN has a few other handy features that can help dramatically speed your site up.

Image Optimizer is a service for $9.50 a month BunnyCDN offers. This allows you to compress images, dynamically resize them, minify your CSS and JS, and serve them as WEBP. This is great for image heavy sites, as it allows you to get images loaded quicker.

HTTP/2 is also supported by BunnyCDN. This lets your site load more files at the same time, meaning that you can split your CSS for better loading speeds. Brotli and GZip is also offered by BunnyCDN, letting you compress your files for smaller file sizes.

Instant zone purge means that you can purge all items in the BunnyCDN cache. This is useful if you update an image and don’t change the filename, or have an issue with a plugin or script on your site.

Storage is also offered by BunnyCDN, and you can use it to store large files off your server to save space. I do this for one of my smaller sites – it has limited storage, so I offload all the images on a storage space on BunnyCDN, and then link them on the site. In addition to this, you can use it for cloud storage – my sites backup to BunnyCDN via the FTP it offers (it also offers an API).

Custom hostnames are a brilliant feature of BunnyCDN – instead of hosting off the default URL such as pullzone.b-cdn.net, you can host off your own domain. I do this on this site – cdn.thenerdystudent.com – and it looks a lot cleaner and more professional. A great feature.

This just scrapes the surface of BunnyCDN. It has many more features, such as edge rules, that can really speed up your site.

This is one of the main attractions of BunnyCDN – the pricing. At around $10/TB for the full amount of zones, or $5/TB for less zones, BunnyCDN is very cheap. The pricing was a little confusing for me at first, so I’ll explain it here.

BunnyCDN offers two types of CDN zones – premium, and volume. In the premium tier, you get all servers, whilst in the volume tiers, you get a smaller amount. The below image demonstrates it pretty well.

Storage is priced at 1 cent per gigabyte, which is very affordable. This means it’s great for backing your WordPress site up to, or saving large photos and image you want on your site.

BunnyCDN supports various CMS’ out of the box – you can install a plugin into WordPress, Drupal, and a few other CMS’, which makes it take less than 5 seconds to completely integrate BunnyCDN into your site.

If you have a custom site, you can simply rewrite your reference URLs to BunnyCDN.

Pull zones separate sites out in BunnyCDN – this lets you easily manage each site independently, and see statistics and costs for each site. You can also link your storage zones to pull zones, allowing you to easily link items in your storage zones on sites.

BunnyCDN is a great, highspeed, and cheap CDN that will dramatically speed up your site. BunnyCDN also has a 14 day free trial, which allows you to easily try it out. Since I enabled across my site, I’ve seen dramatic speed improvements.

If you use Cloudflare, I would still recommend using a premium CDN instead. Cache times are much longer, meaning that you get a higher cache hit ratio, and many features offered are cheaper than in Cloudflare. I’ve disabled Cloudflare for my sites – it was an extra hop, and actually added around half a second of load time – I only use them for their high speed DNS now, and use BunnyCDN for CDN.

I would strongly advise looking at BunnyCDN – or any CDN – if you are interested in speeding up your site. BunnyCDN is high speed, and performs well.

Join BunnyCDN via my referral code here to help support the site, or without here.