The Nerdy Student
Advertisement
Home Reviews A Look at Taskade

Taskade is a simple web application that allows you to easily manage lists, and also offer powerful collaboration features that allow you to work on lists together. You can also create lists without even creating an account or logging in. The interface is simple, and you can change the bullet points to various forms of checkbox, and different forms of bullet points. The app is simple, however it makes it easy to manage tasks, and also has strong collaborative features.

Taskade is sort of a mix between Trello, Things 3, and Omnioutliner.

I’ll be taking a look at Taskade from a more solo standpoint. Firstly, Taskade is available on multiple platforms, including web, iOS and Android, and also using native apps on your Windows or Mac PC.

The app can also be added as an extension on you browser if you use Chrome or Firefox. This is a really impressive addition – it makes your new tab a Taskade list, which makes sure you can really easily see your tasks. This is a really nice addition, and is one of the small things that many apps don’t do. The addition of this shows that Taskade thinks of even the little things, and these really improve the user experience. For those who often forget their tasks, this is a great feature.

I’ll mostly be using the app on the web on on iPad, however all the apps are pretty similar so there isn’t really any difference between the apps.

Inside the lists, you’ll see what you can do with Taskade. It allows you to create vertical lists that have different formatting options that include highlighting, bullet lists, tasks and subtasks. You can indent under each area, which is why Taskade reminds me of Omnioutliner. These can be used in combination, to create project roadmaps, task lists, bullet journals, and much more. 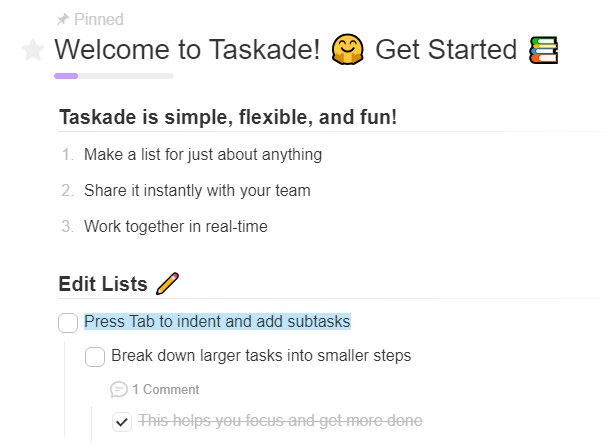 Now onto some of the features that Taskade offers – one of it’s largest benefits is the sharing and collaborating that the app offers. You can collaborate with others in real time, and comment on individual tasks or on the entire project. In addition, you can invite people to a workspace, or into different lists that you want them to be able to work on. Once you have shared your list or workspace, the people you have invited can edit in real time along with you. In addition to this, you can also chat with the other people by clicking on the comment button. A nice feature is that you can comment on individual points, so if you have an issue or a question about one, you can send a comment.

You can also change the background with Taskade, between colours and images that you upload. On top of lists, you can see a progress bar which shows you how much of your tasks you have completed in the list. This gives a good overview to see where you are in regards to the task.

Taskade is available on mobile too, so you can access your tasks on the go, providing that you have an internet connection. There is both an Android and iOS app, and they offer most of the features available on web.

However, one thing that I was not present was change history. App such as Google Docs have this, so you can see what your collaborators have changed, and revert changes in case there are issues. In addition to this, it’s important to have the ability to lock collaborators into suggesting edits, or into just viewing with the ability to post comments. Taskade lacks these features, and it would be nice to have the ability to see project history and more control over collaborators. To add to this, it’s important to have offline connection to your task lists, and Taskade requires an Internet connection. It’s disappointing to see more and more apps relying on always having an internet connection, and Taskade should be accessible without an internet connection.

I can see Taskade being very useful for software developers / web developers, who want to be able to easily see client feedback. Taskade would be brilliant for this, because it’s easy to ask about various parts of the document. Large teams could also use Taskade to easily make large task lists and assign them to various people.

To conclude, Taskade is a very impressive app. It’s completely free to try, and you don’t even need an account to give it a go – this is a popular feature in a world were people want less and less accounts. If you are looking for a simple app that lets you lay out lists so you can easily see where you are, and what you have left to do.

You can view Taskade here, and can give it a go without signing up to anything.

If you decide to upgrade to the Pro account, you can use the teamtaskade50 code to get 50% off.