Everyone has keys, and usually you have them on you at all times. People often get holes in their pockets carrying keys, or have them digging into their side. However, the KeySmart aims to solve that, using a Swiss Army knife approach to keys, allowing you to fold them into a metal structure, and fold them out for use.

There are five options of KeySmarts, the original, one in leather, the rugged, one with a torch, and finally the KeySmart Pro which features an inbuilt Tile bluetooth tracker. I’ll be taking a look at the KeySmart Rugged in this review, but I’ll also cover the other KeySmart models and take a look at the Pro. 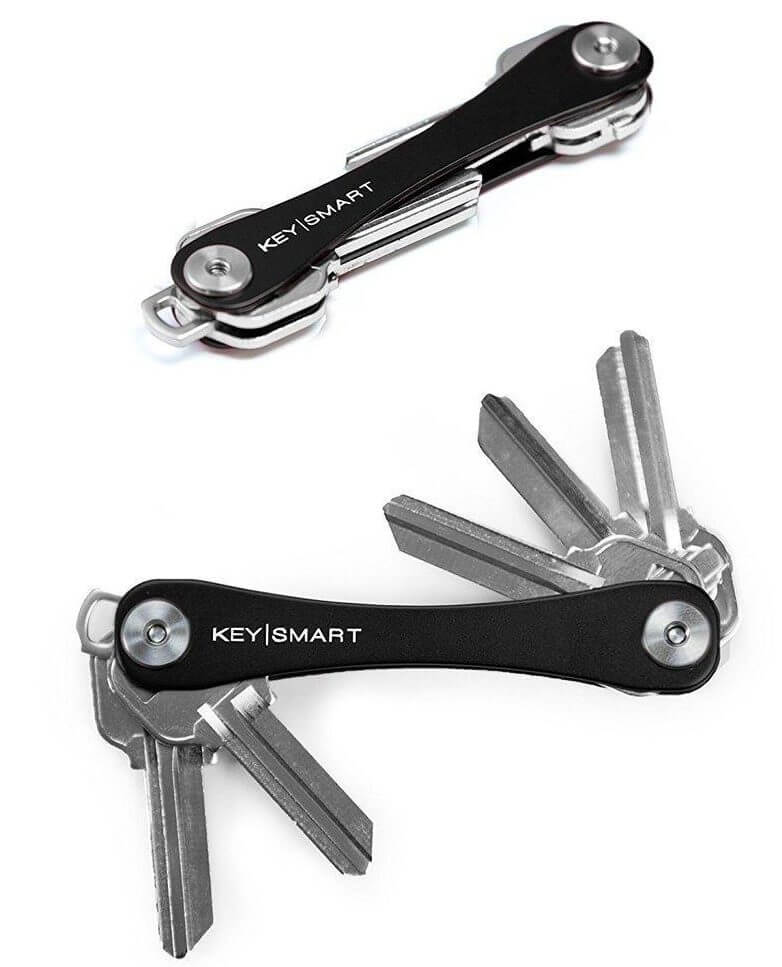 I’ve included a gallery at the end of the post of my KeySmart.

You may be wondering why I opted for the KeySmart out of all the models, especially regarding the KeySmart Pro offering. The first reason is size – the KeySmart Rugged is a larger size and can take more keys than their other offerings. Secondly, the KeySmart Pro is made out of plastic, and I’d rather have durable metal in my pocket. In addition to this, I use Chipolo not Tile, so I just attached a Chipolo onto the key loop that you can use for larger keys such as car keys.

The KeySmart works by having two 4mm posts that you can slip your keys onto, and the KeySmart is made out of two plates. You can look at how you would assemble your KeySmart here on the website. Spacers come in the package to allow you to fit the two plates together with a flush finish.

First impressions of the KeySmart were good – the model I have, the Rugged, comes with a bottle opener that doubles as a loop to add larger keys onto, and spacers are included. All KeySmart models come with a small loop that you can add to it, which allows you to put your car keys, or larger keys onto the KeySmart. KeySmart also sell tools that you can put on your KeySmart, such as a tweezers or foldable knife, sort of turning it into a Swiss Army knife/key holder hybrid if you want.

Putting the KeySmart together was relatively easy, however was a little fiddly once I started adding more keys. It will take some time to figure out a layout that will work well, and allow you to quickly pull your keys out, and have your plates aligned. It took me around 30 minutes to get my KeySmart set up in a way that I liked it. I needed more spacers, so decided to make my own out of foam which was easy to do. You can also purchase more if you wish to from the KeySmart website.

You might notice in the image above the larger key on the left, the Chubb key. I’m not sure how common these are in America, but they are very common in the UK where I live. I only use two keys, so I managed to sort my KeySmart around the Chubb key, so it works well and I can still easily slide it out and use it (it’s my least used key however, so not much of a concern).

This does bring me onto an issue with the KeySmart – for those who have lots of Chubb style keys, where they aren’t flat, the KeySmart won’t be a good solution. These types of keys take up a lot of space, so I had to use the majority of the KeySmart spacers and my own foam spacers to stop the Chubb key from scraping and other keys. It also made it much more of a fuss to set up. However, once I got the balance it did work well. But if you have more than one Chubb key, it would be hard to recommend the KeySmart.

However, if you don’t have many Chubb style keys, the KeySmart is a really nice key manager. The metal is tough and high quality, and the screws are too. You may need to tighten them overtime with use, but this is normal with screws.

There are five different versions of the KeySmart, the KeySmart Classic, the Leather, Rugged, Lite (which has an in-built light) and the Pro. The KeySmart Classic is a thinner version of the Rugged, and the original KeySmart. The Leather is one made with Leather plates, and I really liked the look of it, and it’s my second favourite KeySmart. The Rugged is the one I have, with slightly thicker plates. The Pro is the one with the built-in Tile, and I’ll go into a little detail about that below.

I really like my KeySmart. After the initial hassle of setting it up around the Chubb key, I’ve used it for around a week now and it’s easier and nicer to use than having your keys on a ring, or like I had, in a little key pouch.

For those with flat keys, I can recommend it, but I would struggle to recommend it for those who have multiple Chubb or larger style keys. So, if you like the KeySmart and have lots of flat keys, it would be a great buy. It works well, and I like that you can add tools onto it. However, if you have large and thick keys, the KeySmart may not be for you. You can see from the picture above that a Chubb key takes quite a lot of space up in the KeySmart.

If you want a KeySmart, you can get $10 off using my referral code. Or, you can check out the KeySmart website here.

As promised at the start of the post, here is a gallery with pictures of my KeySmart setup.