I’ve always been a big fan of Adonit ever since their stylus making days, and it’s been interesting to see how the company has adapted since the release of the Apple Pencil. I was recently sent the PhotoGrip Qi, an interesting product designed to make your life easier when taking photos with your phone. As phone cameras are getting better and better, less people are using DSLRs and stand alone cameras to take their photos, so it’s interesting to see how the PhotoGrip Qi will make taking photos.

One of the standout features of the PhotoGrip Qi is the wireless charging, that you can turn on and off to keep your phone juiced up with the 3000 mAh battery built into the grip. The grip also comes with a mini tripod, and a travel pouch. 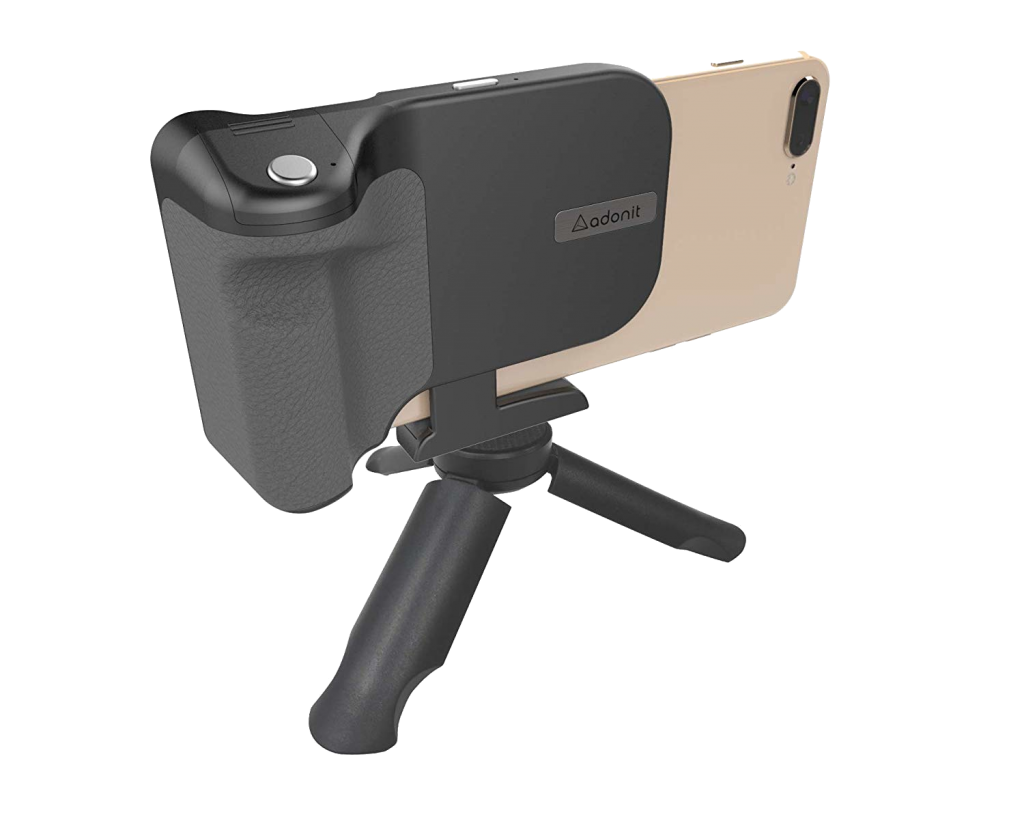 For those who enjoy taking photos on their phone, the PhotoGrip is something you may consider buying. However, is it worth your money?

In the box, there are a few things:

Firstly, there are a few key features of the PhotoGrip. The grip only requires one hand to operate, and it is textured so if you are adventurous and don’t use a case on your phone, it’s less likely that the phone will slip and fall on the floor. The shutter button can be removed, and used as a remote shutter button. You can use the included mini tripod to set up the phone, and then detach the shutter button and use it when you want to take the photo. This removes the need for a self timer. In addition to this, you can position the PhotoGrip to stand up to display your phone in portrait mode. For those who often live stream on Instagram or use video calling, this can come in handy.

However, most importantly, the wireless charging is a major feature of the PhotoGrip Qi. This allows you to charge your phone from the 3000 mAh battery which is in the grip to keep it powered as you go on your photo taking adventures. The battery can be turned on and off using a button on the top of the grip, so you can control when you want to use it. It works well – it means you don’t have to carry around a clunky portable battery with you, and you don’t need to have 100 cables dangling out of your phone as everything is done wirelessly. Whilst the battery size is relatively small at 3000 mAh, you don’t really need anything more if you just want to keep your phone topped up for using the camera. The wireless charger is great for people who need a little more battery when on holiday or taking lots of photos.

The wireless charging feature of the grip is recharged using USB C, which is a nice touch. The set also comes with a USB C cable.

Onto the actual experience of using the grip itself. You can turn it on and off by holding down the shutter button, and it pairs to your phone using bluetooth, once again meaning that you don’t need more cables. The setup is easy to do, and the shutter button is powered by a CR2016 battery, and can be easily and cheaply replaced. The grip comes with one so you don’t need to go out and get one.

To take a photo, you simply press the shutter button, and your camera takes a photo. This worked in both the iOS camera app, and in Halide, a third-party app. It should work in all apps that support taking a photo with the volume button, as it essentially sends this signal to the phone. If you want to take a remote photo, you can place the grip down either by using the tripod or by standing it up, and then take out the shutter button. Then, you can press it whenever you want.

The grip is made out of plastic, and therefore is relatively light. The plastic feels sturdy enough, and the grip is rubberised like a DSLR camera. The detachable remote is on rails of plastic, and does feel a bit cheap when you take it out. The tripod is also pretty cheaply made, but it works as intended so I’m not too disappointed with that. Surprisingly, the strap for the carrying pouch is wide and comfortable, and doesn’t dig into your neck when wearing it for long amounts of time. The material used is soft and doesn’t scratch.

As phone cameras are becoming better and better, it makes less sense to cart around a DSLR and the 600 accessories that go with it. That can be replaced with your phone, and if you are serious, with something like the PhotoGrip.

I’m pretty impressed with the PhotoGrip Qi. If you take a lot of photos on your phone, and enjoy photography, the PhotoGrip may be worth looking at – if you can justify the price tag of $59.99. If you can’t Adonit sell a cheaper version that doesn’t include wireless charging.