I recently began tracking my time spent, and searching for a suitable app for it on the App Store. I wanted something that could be easily started from the widget, synced between my iPhone and iPad, and gave me detailed statistics about where my time had gone. Timelogger fits all of these purposes, and more – it allows me to easily start and stop trackers, view time spent and many more features. 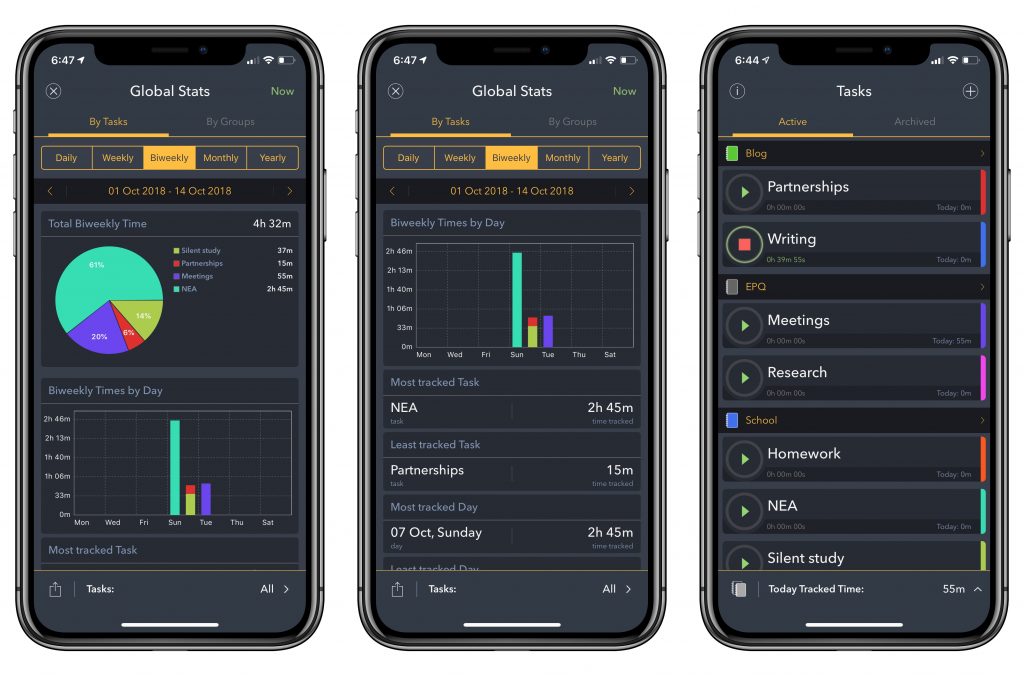 With Timelogger, you can easily create tasks in categories. The main view of the app is a list of timers, and these timers can be assigned to their own category, as well as having a different colour. Beneath the timer, the time it has been running is shown, as well as how long it has been running in total today. I really like the way the main view is laced out – it lets you quickly see where your time has been going at a glance. Of course, there are more in-depth ways to view this, which I will go into later in the post.

You can tap to start the timer, and tap to stop it. This is also accessible from the widget, so you can simply swipe and start a timer. The biggest issue I had with other time tracking app was that it would take a long time to start up the timer. This is not the case with Timelogger – it’s quick and easy to do so. Timelogger also offers both a compact widget and an expanded widget.

The in-depth statistics of Timelogger are very well done – pie graphs are shown, coloured to your project colours, allowing you to see where your time went with a glance. Detailed statistics are offered by the side of the pie graphs. Bar charts are also shown, offering another way to view your data. Scrolling down under the charts offer further statistics such as most and least tracked groups and days. If you want to export your statistics to be easily shared, you can hit a share icon to generate a PDF report which can then be shared. These views can be sorted by periods of time, or between tasks or groups.

For freelancers who may use Timelogger, you can also add how much you get paid per hour. Pay rate can be individually assigned to each tracker. This is then shown in the pie charts and bar graphs too, allowing you to see where your money has come from. I haven’t used this as I have no need for it, however I can certainly see the use for freelancers who charge by the hour.

An interesting feature of Timelogger is that it allows you to set up geofencing reminders, and also reminders for tasks. If you have a task you often complete in a certain location – for example if you travel to work and you want to track the time you spend there – you can set up a geofence reminder that triggers when you enter the location, and remind you to start the timer. The same can be done with time and days – if you often do a certain task on a certain day, you can set a reminder for you to start your timer.

Timelogger offers a Watch app, allowing you to quickly and easily start and stop your timers. I haven’t been able to test this however.

I’m really impressed with Timelogger, however there are some things that I would like to see added or changed. Whilst Timelogger offers iCloud sync, it only takes action once a timer is complete. This means that you can’t start a timer on your iPhone, and then stop it later on your iPad. Integration with Shortcuts would be great, allowing you to trigger timers with your voice for even easier timer starting. Finally, custom date ranges in the stats page would be a nice addition.

This being said, I’m really happy with Timelogger. It takes a while to get used to quickly starting a timer before you start up your task, however after a few days it become natural. It’s nice to see where your time is going.

Timelogger is especially useful for those who are freelancers and charge by the hour, students who want to manage time spent on aspects of their course/courses, and anyone who wants to see where there time is going.

It’s also cheap – the app itself is free, so you can see if you like it, and if you want to unlock more than three timer slots, it’s a one time £4.99 purchase, that gives you unlimited timer slots.

Timelogger is free on the App Store.