iOS 12 was just released last week, and whilst the update came with a huge amount of changes, mostly to the performance of the OS, it also came with a few notable new features that make iOS much more useful every day. These features also give you better insight, and control your device more. 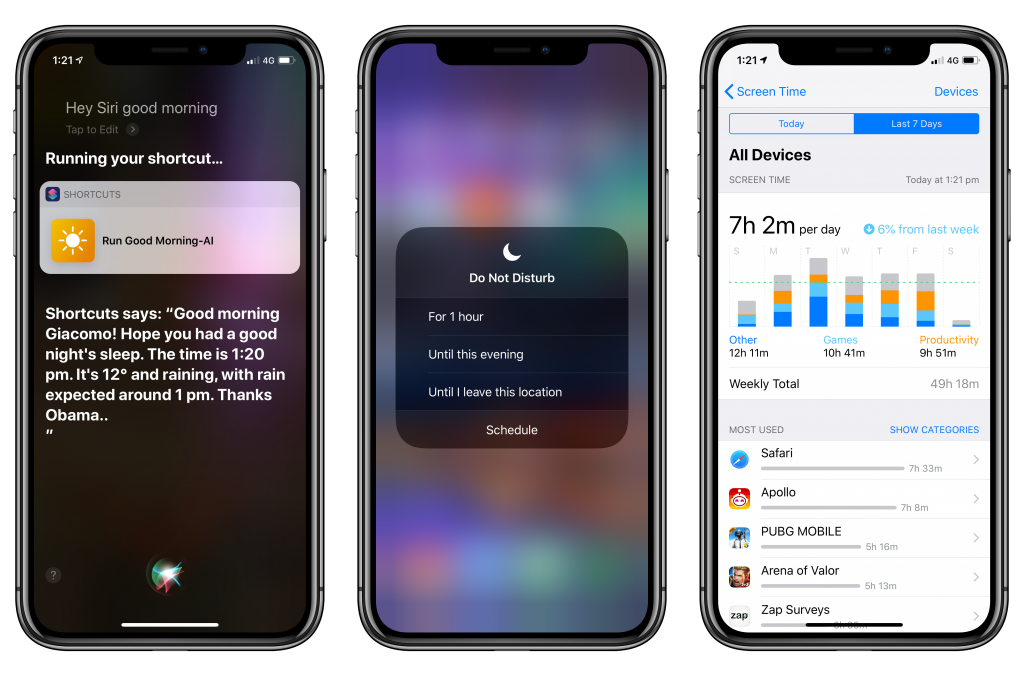 On iOS 12, Siri automatically identifies things that you do a lot, when and where you do them. For example, if you often open Things at 3 PM in a certain location, when you open Spotlight it will suggest Things. It will also do this if you often text someone at a certain time with a prefilled text. This can also be done on the lock screen.

However, what is more powerful is that now apps can allow you to assign a key word in order to trigger an action in the app. Let’s use Things as the example again – if I want to quickly find the chores I have to today, I can say ‘Hey Siri, show me today’s chores‘, and Siri will show me tasks in Things that I have labelled with ‘chore’. This can all be set up in app, and is supported by many other apps. Evernote supports this, so I can create a note directly into Evernote.

The improvements to Siri are great for those who use it, and for those who don’t like me, I have found that since the update I use it a lot more. I don’t use any of the default Apple apps, so the ability to interact with the third-party apps that I do use is great and makes Siri a lot more powerful.

Shortcuts is what Apple made out of Workflow after purchasing it. I am a big user of Workflow, and I’ve written about it multiple times on this site. All Workflows still work in Shortcuts, but the major thing that Shortcuts gives you is deeper integration with apps, and the ability to trigger workflows from Siri.

I use this feature for my Morning Routine workflow. When I wake up, I say ‘Hey Siri, good morning‘, and Siri will tell me the time, weather, events, and the breaking news. This workflow is mainly from Reddit with only minor modifications, and all credit goes to the author, /u/KingofOkay.

You can download the morning routine workflow here, and if you want to get the news in the morning, you can get the news workflow here. Once again, all credit goes to the creator – I only changed the news source to my countries, and removed Apple Music which I do not use (hopefully Spotify will add Siri integration in an update).

When you want to set up Shortcuts to run from Siri, simply go into the individual Shortcuts settings and you can record a phrase that you want to trigger the shortcut.

You can set time limits on individual apps or entire categories now too, allowing phone addiction to be combatted more effectively.

Do Not Disturb Improvements

Now, you can set Do Not Disturb (DnD) to automatically switch off when you leave the location, until the end of an event, for an hour, or until a near generic time (such as this evening). This is great if you often use DnD when you are at a restaurant, class, or another area that you don’t want constant notifications. For example, in class you can enable DnD until you leave the location.

There are further improvements that I would like to see however. It would be great if you could set DnD on until you left a certain app, which would come in handy whilst playing games. Also, scheduling needs to be improved with the ability to set custom schedules that depend on the day, and also better geofencing (enabling DnD when entering a certain area for example).

iOS 12 is what iOS 11 should have been. I’m glad to see the greatly increased speed on my older, and even newer, devices, and the new Siri improvements are great – I’ve used Siri in the past week more than I ever have before, and this is due to its integrations with the apps I use, and Shortcuts.

I’m glad to see that Apple put reliability and speed ahead of features in iOS 12, but that’s not to say that they didn’t add handy features and small tweaks too.