Lumafusion is a video editing app for iOS designed for those used to the power of Adobe Premiere Pro on the desktop. On iPad, it’s difficult to find apps that suit pro video editors. iMovie is not a good example, having only a nice interface. Those who edit movies for a living or as a hobby and want to use the iPad as a main computer may struggle to find a good video editor. Until they find Lumafusion. The app is beautifully made with a clean interface that fits right into iOS, but has a lot of power underneath. 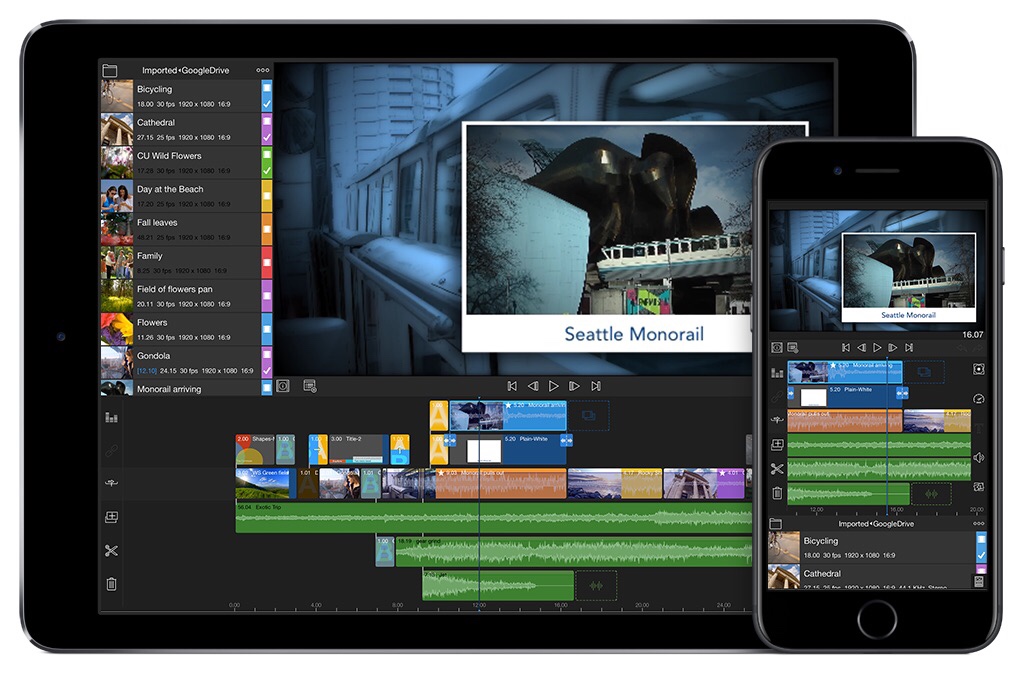 The design of Lumafusion is one of the key selling points of the app. The interface you’ll find shows you all the tools you’ll need in day to day production of a video. You’ll get the timeline, video preview, and sources. There are buttons around the screen which allow you to select if you want various tools, such as advanced timeline clippings. The interface is a really nice blend between simple and complex. It’s not too simple that you have to dig around to find anything you want, but it’s not too complicated that you can’t figure out what you are looking at and get a headache.

Lumafusion has a ton of features, but in this post we’ll go over the major ones. Firstly, you can create a movie in many aspect ratios, including the most common ones you’ll find and ones which you’ll use less often. You can also select the frame rate that you want your movie to run at. One of the best things about Lumafusion is that it allows you to add multiple tracks. This is brilliant – you can add up to three video tracks at the same time, and three audio tracks. That’s six tracks at the same time. This is brilliant, as you can add text or information over the track you are playing. In the image below, I have a video track playing, and on top of that, I have a piece of text that explains what the video is. This allows you to create intros, and add them to a movie very easily. You can also easily create and save this into Lumafusion, a feature that I’ll go into later. Also note the effects between clips, which smooth out the transition.

When you tap on a clip, Lumafusion offers you multiple options that allow you to manipulate it. You can drag on the ends of the clip to edit the starting and stopping points, and drag it around to different tracks in the movie. Tapping on the toolbox icon on the right of the app allows you to do multiple, more powerful things, with the clip. For example, you can clone the clip, detach its from its lane, add a preset (a overlay) and many more things – you can even edit individual frames using the edit button. 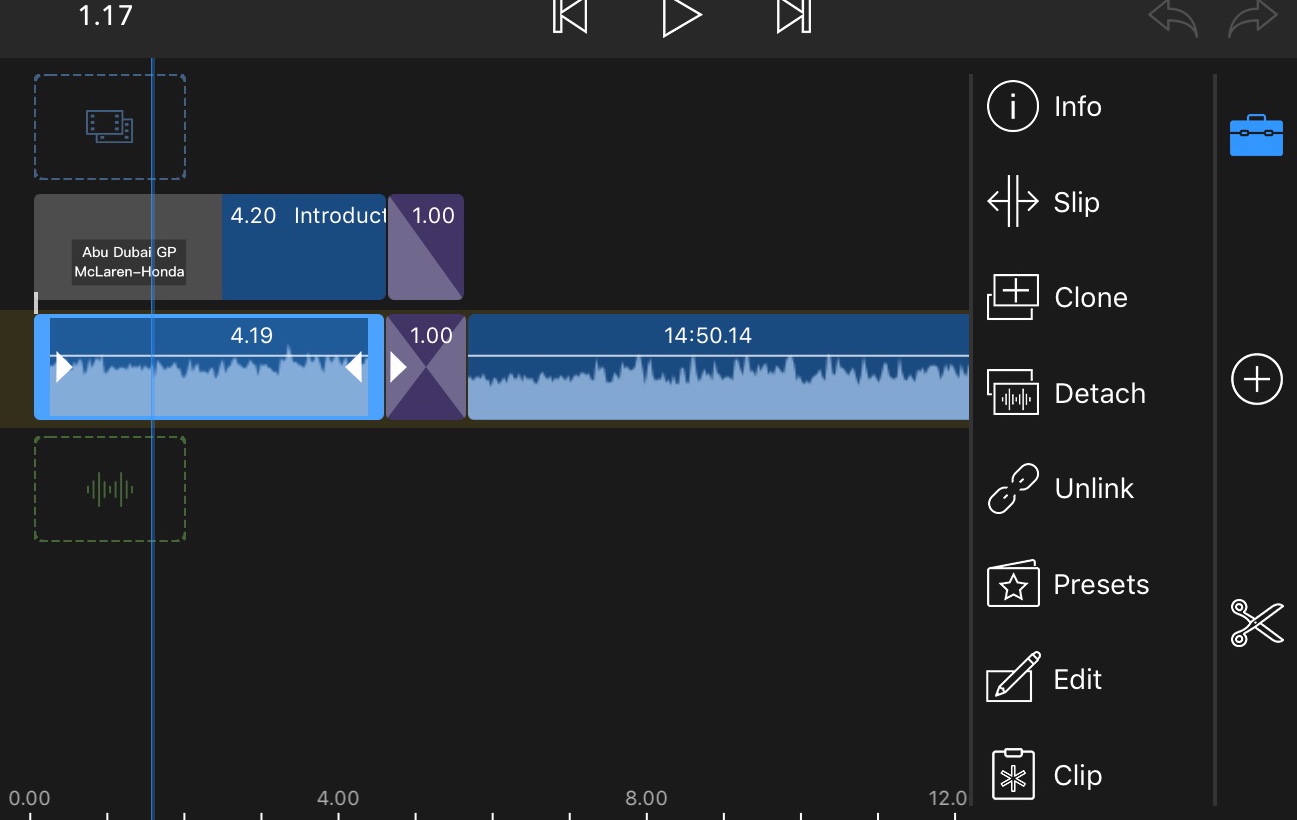 I’ve gone over titles a little already, but they are a great feature so we need to go into them a little more. Tapping on the source picker on the top right of the app allows you to select titles, something you can drag onto a video lane and have overlay your video. 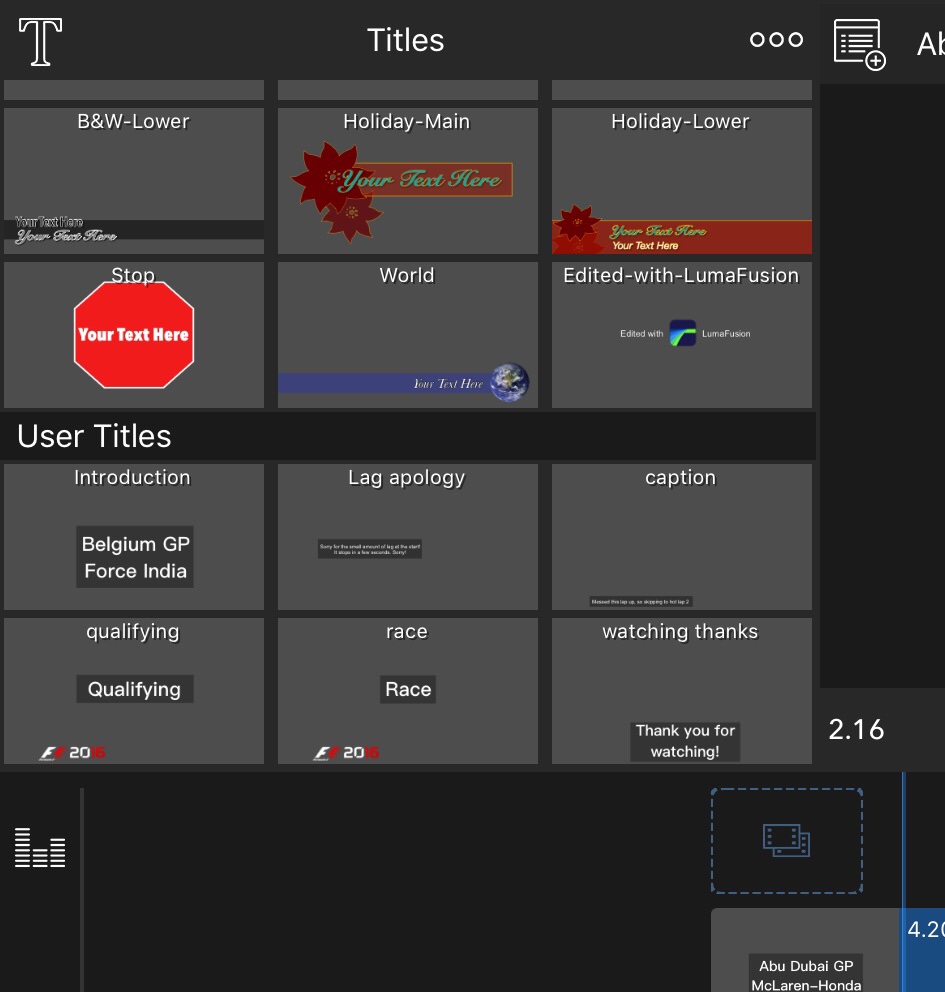 Even better, Lumafusion allows you to make these titles inside the app. Tapping edit when you have dragged the title in allows you to edit every component in it. In the image below, you can edit the title to change the text, image, shapes, and so much more. A particularly handy feature is that you can save the completed title when you have finished it, so you can reuse it in videos. 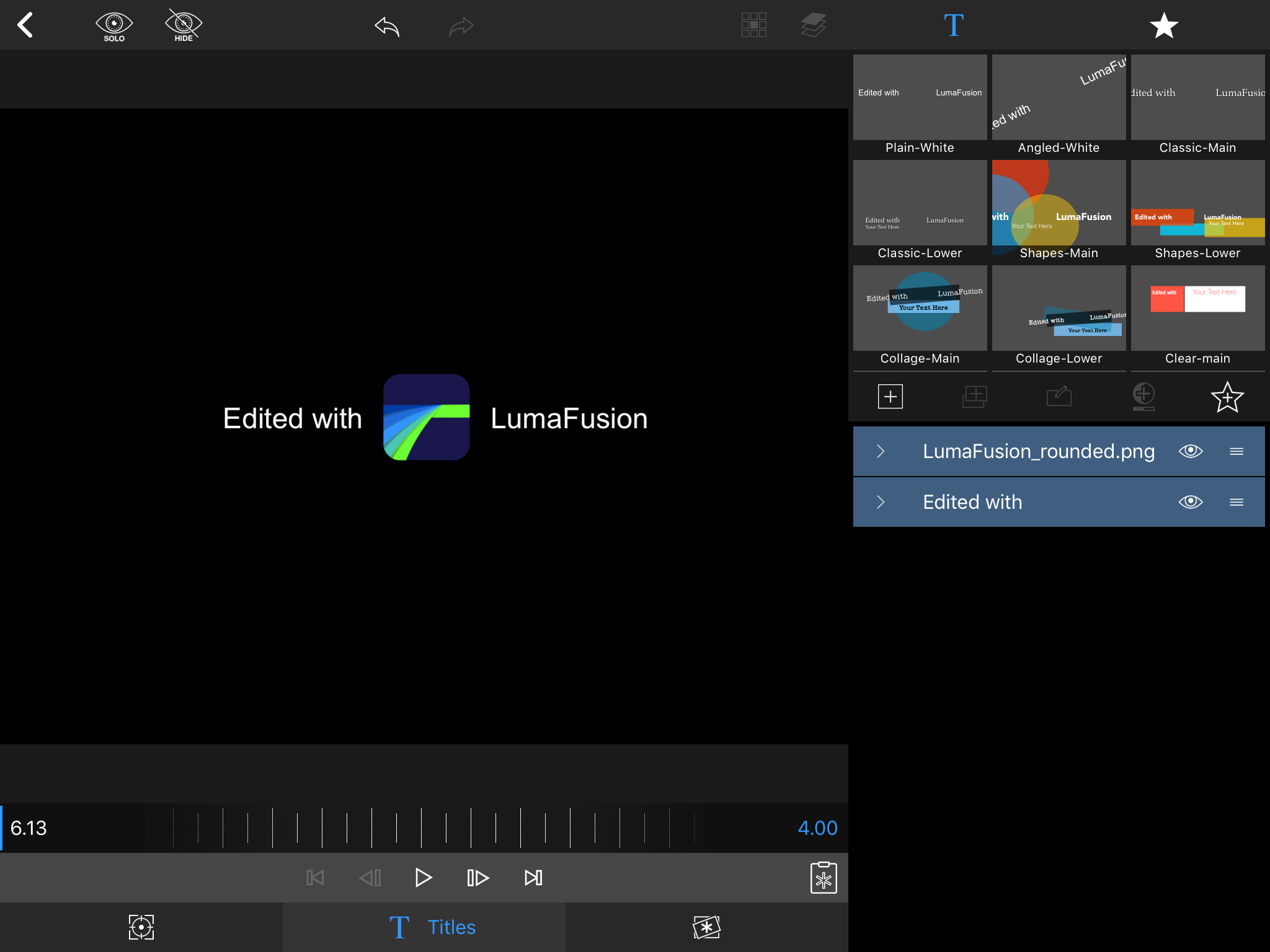 A small feature that adds a lot to the app is that when you move along the timeline, the video preview moves with you. This is really helpful, as it lets you quickly see if your titles are working correctly, and if your movie is looking like you want it to.

On the top left of the app is the media picker. This allows you to choose movies from your camera rolls, transitions between clips in the timeline, titles and much more. You can drag in anything from this media picker into the channel you want to.

Now getting your movie out of Lumafusion. As with many things in the app, Lumafusion is great at this too. You can easily export the movie to the Photos app, Facebook, YouTube, Vimeo, and many other cloud services as well as external apps on the iPad. You can select what frame rate you want the movie to run at, as well as the qualities – up to 4K. You can select if you want to export only the audio, or only the video too.

If you are looking for a pro video editing app on iPad, look no further. Lumafusion is easy to use, relatively quick to get the hang of, and extremely powerful.