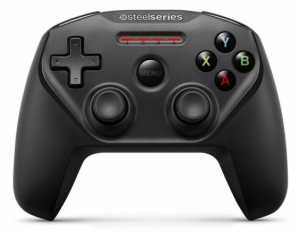 Lots of people use their iPhone, iPad and Apple TV to play games, but not that many people know that you can use a full-sized controller to play many of the games they enjoy to play. Controllers take advantage of Apple’s Mfi, and enable you to control the game with an external controller. Games including Oceanhorn, Space Marshals and Grand Theft Auto all support the controller, and those are only three games among nearly thousands that do. I’ve found that using a controller has really enhanced and improved the game play of many of the games I previously enjoyed, and if you play lots of games, the Steelseries Nimbus is a must have for you.

Let’s get into the controller first. The Nimbus is built out of sturdy and high quality plastic, which feels a lot like the plastic on the Xbox or PS4 controller. In size, the Steelseries Nimbus is nearly identical to the Xbox One controller. For me, it feels right at home as I used the play on an Xbox a lot.

The Steelseries Nimbus has two triggers like all controllers have. They are nicely built-in, and do not feel fragile and they don’t wobble about – they are very sturdy. Above those two triggers, there are two shoulder buttons, and these both feel nice and sturdy.

On the front of the controller to the left, you have a standard d-pad, and below that you have a joystick. In the middle of the controller there is a menu button, which opens the in-game menu whilst you are playing a game. Then, on the right there are the X, Y, A and B buttons like you find on all controllers, and then another joystick.

The controller features four lights at the top, below the Steelseries logo. These lights show the connection status of the Nimbus, as well as showing you the charge progress when you charge it. When you switch the controller on, a red light moves left and right on the lights, and when the controller is paired, the first light lights up. The Nimbus has four lights, and you can connect up to four controllers to a game to play together. The other lights light up when you connect other controllers – however, I have not been able to test this as I only have 1.

In between the shoulder buttons are where you switch the Nimbus on and off, pair it and charge it. A switch shows whether the Nimbus is on or off – if red is showing on the button named ‘Hold’, the Nimbus is off, but if no red is showing, it is on. Then, you have a button with the bluetooth logo on – this lets your pair the controller with other devices.

One of my favourite things about the Nimbus is that it uses a lighting cable to charge1 – this means that you don’t have to take around another separate cable to charge it, and you can just use it with the same cable that you charge your iPhone or iPad with.

Another impressive feature of the Nimbus is its battery life – it lasts up to forty hours of gameplay on a single charge, and I’ve found that it charges very quickly. This means that even on a long trip, for example a long flight or drive, it’s very unlikely that you’ll run out of battery on your Nimbus.

Setting it up with your device

It’s a lot more fun playing games with a Nimbus controller than with the Siri remote, which isn’t great for games.

Playing games with the Nimbus

Obviously, you’ll be interested on how the Nimbus performs in games. Remember that not all games support Mfi controllers – however, most of the large, popular and well-known ones do, as well as smaller games. I’d say 80% of the many games I own support the Nimbus, and nearly all of my favourite games do.

This being said, Steelseries does have a great free app that allows you to find games that support Mfi controllers, which you can get here for free. You can also ask around on forums or on Reddit if the controller supports a game you have.

Games automatically detect when you are using a controller, so you don’t have to go and muck around with settings. You simply open the game with your controller connected2, and you are ready to go.

I played many games with the Nimbus, including Real Racing 3, Asphalt 8, Minecraft, Terraria, Oceanhorn, Goblin Sword and , many more with my controller, and I found that in most games, it preformed really well. The only disadvantage I found was with the games – some games don’t let you remap the controls, and that means you could be stuck with awkward controls – I found this to be the case especially in Oceanhorn3.

The controller had no lag whilst playing the game, as soon as I touched a button, it happened. The controller never disconnected, and was very reliable – I have not had an issue with it yet, and I’ve had it for over two months and have been using it around two hours a day.

What really impressed me is how pressure sensitive the controller is. I was playing Space Marshals and Xenowerk with it (which has great controls set up with Mfi controllers), and I could lightly push down on the trigger to only fire one shot, or I could push the trigger fully down to ‘let it rip’.

Platforming games such as Goblin Sword and Rayman Adventures where also a lot more fun with a controller, as were RPG games such as Final Fantasy and Asdivine Dios. Many ports of desktop games, such as Grand Theft Auto and Oddworld: Stranger’s Wrath work really well with the Nimbus, and games that were originally ruined with controllers are so much better with the Nimbus.

There are a few things that I would like to see added to the Steelseries. The controller as itself is great, however it’s tricky to play games on an iPhone with it. I would love it is Steelseries produced a phone mount that could be purchased for the Nimbus4. I also found that I could not figure out how to get the battery level when I was using the controller – toggling the switch as the FAQ said to do did not work for me.

This being said, the Steelseries Nimbus really is a great controller for playing games – it feels sturdy, is nicely built and also has hours of battery life. With over hundreds of games that support it, you won’t run out of games that use it. I also like the feature that allows you to link up four of the controllers, and play a game split screen – this used to only be available on console, but now you can do it on your Apple TV and iPad. I really would suggest that you purchase the Nimbus if you enjoy gaming on iOS or on your Apple TV.

Using a controller really enhances the gameplay of iOS games, and makes them feel so much better and higher quality.

You can purchase the Steelseries Nimbus for £49.95 here.

If you want to try it out before buying it, you can always head over to an Apple Store, where they have demo units available to try out.