Cosmic Watch is a great looking real time world-clock, which shows you positions of planets in the solar system, star charts and so much more. It shows these above the beautifully rendered earth, and allows you to select and view times in various places in the world.

If you are a fan of astronomy and stars, Cosmic Watch may be of interest to you. 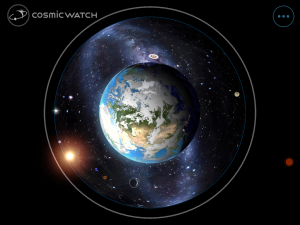 There are three main modes that Cosmic Watch offers you. These are the Clock Mode, the Astrology Mode, Astronomy Mode and the Solar System mode. These can be accessed to the left of the app. Above these modes is the minimal view, which removes overlays from the planet. You can also remove all the other buttons with the button at the top right. This lets you just look at Earth and the positions of planets, and it does look great. There is a search feature, allowing you to search for different places on the earth, and then there is a star icon. The star icon allows you to save favourite locations, such as your nearest city or somewhere where you often visit.

The bottom of the app contains the setting button, and then an icon of a clock. I’ll go into the clock first – I think it’s a really cool feature of the app. With it, you can rewind and fast forward time, and this allows you to see the different positions planets will be in, as well as sunset and sunrise times, and constellations.

Clock Mode shows the local time of the selected location in digitally in 24-hour format, and then analog time is surrounding the earth. Areas that are facing the sun are lit, whilst those that are facing away are dark. The circle around the planet is made up of a few rings, with one having the earth and Sun in their current positions, and then a clock which shows minutes and hours.

The next button is Astronomy mode, where there is a dome with the constellations it. Stars and constellations have name tags, and planets in the solar system are shown at various positions around the earth. However, I have found that it’s pretty confusing if you want to use the app to find constellations. This is because they are the other way around, and you wouldn’t actually see them like this. I think that Cosmic-Watch isn’t very effective as a star map as you are viewing the constellations from the outside, and a star map is best served viewing from the earth’s surface. The open sky partially aids in solving this issue, however it still does not fix it as the earth is still shown, and this gets in the way. 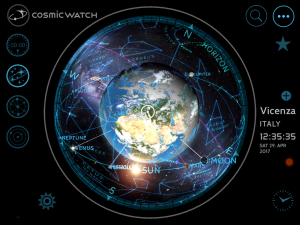 Astrology mode can be accessed by the next button. I’ve never really been interested in astrology, so I didn’t really understand what was going on. The 12 astrological signs are displayed in a ring around the planet, and another ring which is broken down into b=months shows where the sun is. You can use the clock feature to go backwards to when your were born or another date, and see what your star sign is if you like to do that sort of thing. 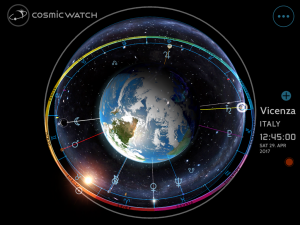 Finally, the solar system mode shows the solar system. The first four planets are shown inside the orb, and the orb has rings around it with the season and month. Other planets are shown outside the orb. Cosmic Watch also offers a geocentric view, which allows you to see the motion of the other planets relative to the earth’s position, and then the topocentric view that shows their motion relative to the point you have selected on Earth. 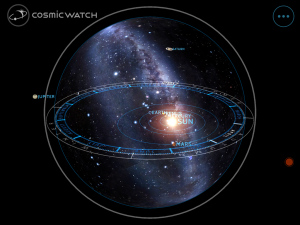 Cosmic Watch is a beautifully crafted app, and I like the amount of modes it comes with, so you can really explore what is going on around the earth. Whilst Cosmic Watch’s Astronomy view is hard to use to star gaze, it does offer features that are fun to play around with, such as the time warping feature. I think that Cosmic Watch is an app that may interest those that are intrested in the workings of the universe.