Newton has closed down – you can read more here.

Email’s are a large part of people’s lives, and there are so many choices for an email app out there. I manage three email accounts on a regular basis, two of which have many emails incoming at all hours of the day. Newton Mail is an iOS, Android, Mac and Windows email application that aims to help you tackle your email, with some powerful features that are under a simple interface, such as read receipts and app integrations.

Newton is available for all major platforms, including Windows and Android, which really makes me happy – one of my major gripes with programs is that they are not available on all platforms, but Newton certainly is – another thing going it’s way is that all platforms have the same basic layout, so you don’t need to learn how to use different interfaces. This is one of my favourite things about Newton too – it’s nearly identical on all platforms, and works in the same way. All your settings are synced across devices, so you can just log into Newton on a new device and go.

Newton is a premium app – you have to pay a subscription to use it, and I do think that the subscription is very expensive for an email app – it’s $50 a year, which is expensive for both professionals and students a like. So the question is – is Newton worth the price it’s asking?

Let’s start with the inbox interface – I really like it. It’s simple, and it feels clean and uncluttered, even when it’s stuffed full of emails. The top of the app consists of a white bar with three lines which open up to allow you to access different accounts, a search feature, allowing you to search all your emails, whether still in your inbox or archived, buttons that allow you to interact with the email and do things with it – such as archiving it and deleting it – a compose button, which when you select it brings up the compose view, and then your profile picture, which when clicked on brings up options such as settings. You can see which email is from what account when you are in the ‘All Accounts’ view by the small colored strip to the left of the email – you can change what color shows in the Newton settings. 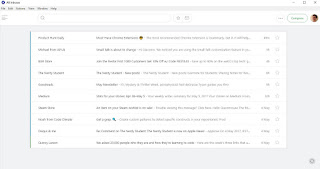 Below the bar is a grey space, and this is the main area where emails are put. Emails appear as white bars, with minimal actions on them – you can select them, star them, or click on them to read them. The white bar shows the sender, subject, and a small section of the message, and then the date that it was sent. Hovering over the email exposes actions, such as archiving, snoozing and deleting. These actions can be edited and adjusted to suit your needs, which is a really nice feature of Newton.

With iOS and Android, swiping on the emails brings up these actions. You can long swipe to delete, or do a short swipe to archive, and things along these lines. What happens when you swipe can also be changed on the mobile app. 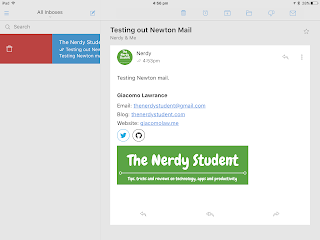 I really like the simplicity of the inbox – even when I have 30 to 40 emails in it at once, it still looks clean, and doesn’t have a lot going on. However, don’t let the on-the-top simplicity deceive you – Newton has many powerful features under the hood that I’ll get into later.

I often like to clear out my inbox, and have it nice and empty. I often archive emails as soon as I have dealt with them, to keep the clutter away. When you have nothing in your inbox, Newton displays a nice cartoon image of a mountain, along with some text.

Selecting the lines in the top left of the app expose the various accounts you have added, as well as the ‘All accounts’ option. This allows you to switch around into different accounts, and filter emails down to a specific account. You can also set colors that show which email is from which account in the ‘All Accounts’ view. 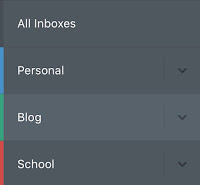 You can also delve into the accounts, and see all the folders and labels that you would see normally. These all have nicely made icons, and they look really neat.

The email interface follows the simplicity that the inbox interface follows. When you select an email, it will open up that email in a simplistic view. In the white bar on the top of the app, you’ll see more actions that you can do with the email, and you’ll find two arrows that allow you to move through emails by pressing them. The email subject is shown in large letters in bold, which will make sure you don’t forget what the email is about. You then have a star button, that allows you to star that email if it is important to the right.

You then have sender information. Clicking on this gives you links to the senders social media profiles if Newton can find any, and also gives them a bio from social media. It gives an image of them too, and also gives the original email that they sent it from. I really like this feature of Newton, as it gives you an idea of the person that you are sending the email too. It’s really neat, and is one of my favourite features of Newton. 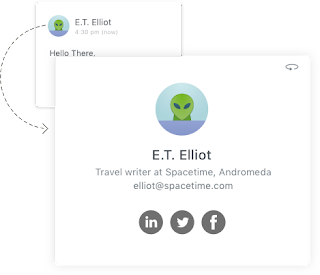 There are three buttons to the bottom of the email, which allow you to reply to all, simple reply, or forward the email. Then, to the left of the user profile on desktop, or to the right on iOS and Android, you have three circles. These allow you to use integrations that Newton has, such as clipping to Evernote or Todoist. I’ll go into a little more detail on these later into the post. 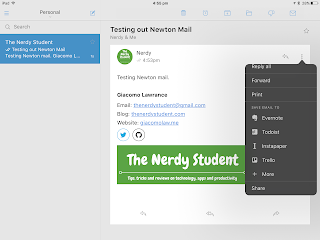 The email interface follows the simplicity that I’ve seen throughout the app, and is easy to use yet powerful underneath. It doesn’t clutter you with interface options, and leaves everything looking nice and neat.

Writing and sending emails in Newton is a great experience. You’ll find the Compose button at the top right on Mac and Windows, and you’ll find the classic-looking compose button on iOS and Android. The email view is very simplistic, with nothing such as toolbars and the like cluttering your view. You have the sending field, subject field, and then the main email body. Then, if you want, you can have a signature. At the top, you can change which email account you want to send the email from – this also changes your signature to the account you have it set to. You also have a paper clip icon at the top, allowing you to attach any kind of file (note that images cannot be added inline sadly), and a alarm icon, allowing you to choose what time you want to send it, to remind you if it is not replied to, and finally to notify you when the email is read.

The mobile experience is very similar – everything looks nearly identical. However, the paper clip icon and the alarm icon are to the bottom right of the screen. Tapping on them brings up more options, in line with the desktop options. 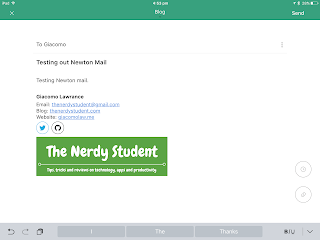 Another favourite feature of mine is that the formatting options are hidden until you select the text you want to format, and then they appear at the bottom. I think this keeps the app looking clean and neat, and I really like this about Newton. However, I do believe that this may annoy some people, and I think it should be made an option; allow them to be shown if someone ticks a box in the settings. 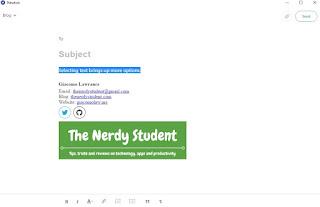 I love composing emails in Newton – whether your replying to an email, or sending one out to someone, the editor is always clean and not cluttered.

I’ve been talking about the powerful features beneath Newton for a lot of the post, and I’ll go into them here. Newton has some really nice features that makes it stand out from other apps, which might make you interested.

Newton has integrations with many services, which include Todoist and Evernote, among many others. It’s really easy to get going with connected apps – just select the service you want to use, and Newton brings up that services connection window. Sign in, and then start quickly saving your emails. 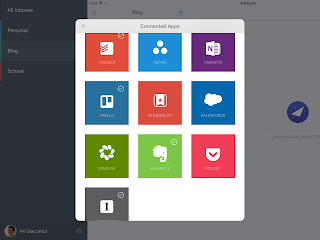 Snoozing emails is another handy feature that Newton offers. You can select preset dates to snooze the email until, or choose a custom date.

Read receipts are great in Newton – instead of being some over complicated and cumbersome feature, they are simply small ticks near the subject line of the email. When the email has not been read, the ticks show as grey. When they have been read, the ticks turn blue. You can customise the options, such as sending you a notification if the email has not been sent, and you can also be alerted to follow up if no one replies to the email.

Finally, the sender profile is another feature that Newton offers. It shows links to the persons Twitter, Facebook and other social media profiles, and puts a biography that was pulled from their social media. It’s very useful when you are emailing a new contact, as you can find out more about them.

Newton has many great features, and I love the way the mobile apps sync with the desktop apps, so all your settings are as they were on your other device. Newton also offers support to all major email clients. The Android and iOS app are very similar, and both work well and are easy and quick to use. Newton is streamlined, simple and quick, but also has a lot of power beneath the simplicity.

Newton is one of the best email apps I have used, however it comes with a price – it is $50 to use a year, which is very expensive for an email app. Some people may believe that this is a justified price, however as a student I do think it is too expensive. However, for people such as business men and others who work with email a lot, it may be worth it for them. Remember that Newton offers a 14 day trial, so you can use that to check out if it is right for you.

It’s your choice if you want to spend $50 a month, but luckily there is a 14 day trial that will allow you to judge if it is good for you. Newton is available for iOS, Mac, Android and Windows.