Update: Transmit has been removed from the App Store. FileBrowser is a good FTP/SFTP alternative.

Transmit is an app for iOS that allows you to upload files and images to FTP servers, Amazon S3, WebDAV and multiple other servers across the internet. 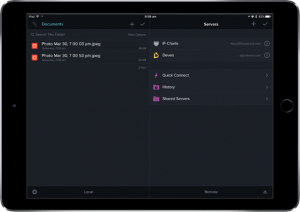 One major block I came across whilst programming in iOS was the fact that it was extremely difficult to upload to an FTP client on your iPad or iPhone. I found some inline solutions, but they were pretty clumsy and didn’t really work as wanted.

After searching around on the App Store, I found Transmit, which is an app that allows you to upload documents and images from your iPad to various services around the internet. The one that attracted me was FTP access, which I use for multiple websites that I have.
Transmit has a simply interface, and it’s extremely easy to get started with. Simply add your server, with the relevant info for each, and you are good to go. 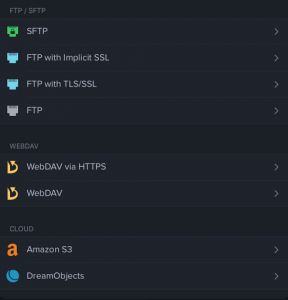 When you tap to open the server, Transmit comes up with all the files in the server, just like you where browsing it on a PC. You can upload images, documents from iCloud or other cloud storage platforms, and you can even edit the files you find in the server locally (note that they will have no syntax highlighting). If you are a user of Coda, a programming app also by Panic, you’ll be interested to know that out can open a file form Transmit into Coda, edit it, and then send it back to Transmit where it is updated on the server. 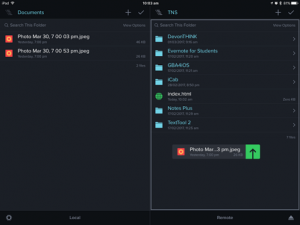 I’ve found that Transmit has been working flawlessly for me – I’ve had no problems, either on the server side or on the app itself. The app is quick and easy to use, and I’ve found that my files have uploaded quickly, and they aren’t corrupted.
A share extension is also offered by Transmit, meaning you can select multiple images directly from the images app, or use the share extension in another up to upload different file types to a server via Transmit. 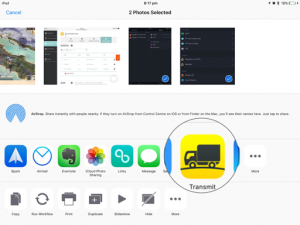 Transmit also supports the Share Sheet extension, which you don’t find many apps using, and it’s nice to see extra functionality built into the app. You can easily pull in files from your servers into apps such as Evernote and other apps that use the share sheet functionality. 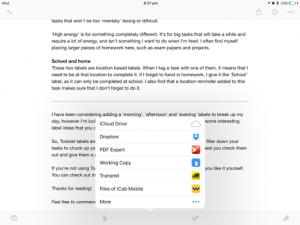 A cherry on the topping of Transmit is it’s integration with Workflow, which allows you to make complex actions that upload files to your server. Panic also offers Panic Sync, which allows you to sync your setting across devices that use Panic Sync.
If you find yourself away from home a lot, and wanting to update, change, or download something from a server, Transmit is the best option for iOS out there. It’s helped me update my websites on the go from an iPhone, and when I’m away from my computer on holiday. Transmit is a must for a web developer, and people who use servers to store files and images. Transmit is available on the App Store at £9.99.
Thanks for reading!
Feel free to comment below!
Advertisement