Safari is iOS’ default browser, however it’s not the best. It doesn’t handle downloads very well, as well as missing many features such as plugins, full screen and many more. However, iCab Mobile solves these problems. It has features such as plugins and an advanced download manager that will attract over people using Safari and other iOS browsers. 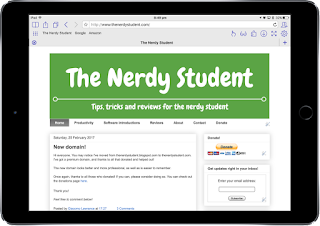 Another limitation of using a third party browsers is that the link’s won’t open in it, they will open in Safari. However, iCab offers the ability to hold down on links and tap on ‘Open in iCab’, which effectively allows you to bypass the issue.

However, don’t let these limitations put you off. iCab has multiple themes you can choose, so if you want the retro iCab you can have that showing, or you can have it modern looking. It also allows you to have modules, such as saving to Evernote and Instapaper, but in my experience some of them do not work.

Of course, iCab offers the standard features that a web browser would. Multiple tabs can be opened, bookmarks can be added and viewed on the top bar, and so on. However, it also has some features that only desktop browsers have. One example is the option to have multiple accounts on the browser, as well as guest browsing. This comes in useful if you have a family iPad and share it. It also has features such as in-app proxy server, draw and multitouch gestures, form field saving and many more.

iCab excels when it comes to downloading. For example, if I want to download a video, Safari would show that video in the app, and there would be no way for me to get it out of Safari and save it to PDF Expert 5 or wherever you would save the video. However, with iCab it downloads it locally, and I can tap on the download button and see my download history, and also interact with my downloads. I can save them to the app I want, watch the video in iCab, and even generate a QR code to the link. iOS falls when it comes to file management and downloading, but with the new advancements in iOS such as the document picker, and apps like iCab, it can become very powerful.

Browsing the web in iCab works fine, just like any browser. The interface is not too obtrusive, and you can enter fullscreen mode that allows you to completely remove any interface.

I think that iCab is a very powerful app, and if you want a better app than the standard Safari you would do well to go with it. The only large disadvantage is on the iOS side of things, but that can be fixed using the handy share extension. iCab is available on the App Store for £1.99.