Update: TextTool has been discontinued, and removed from the App Store. 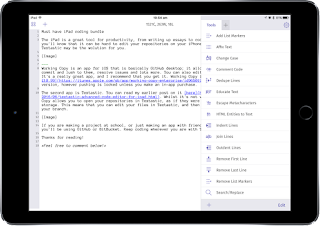 To get started with TextTool, you hit the plus button on the screen. This clears your ‘workspace’, so make sure you don’t do it if you still have unsaved text in there. Simply tapping the plus button clears your current workspace, and therefore starts a new completely blank one. However, tapping and holding down the plus button opens up a whole new wealth of options. You can create a new workspace from your clipboard, import a document or a URL, along with starting a completely new workspace from these things. Another thing TextTool has is a share extension, meaning that you can move text from other apps into TextTool. There are two options when sending text – switching to the export after it’s moved over, or staying in the current app that you are working in. I like this quite a bit as it doesn’t disrupt your workflow. It also has the advantage of being able to append text to TextTool from multiple apps.

Another strong point of TextTool is the highly customisable interface that you can choose. There are four themes, with two light and two dark themes. You can change the font you use, and you can also change how the text looks like. One nifty thing is that the app gives you a preview of how the text will look, and I really like this. TextTool can be used as a code editor if you really want. It has options for HTML, XML, JavaScript and more syntaxing. TextTool supports markdown, which is great too.
TextTool also supports multiple keyboard extensions, such as previewing what you have written, showing tools and multiple more. TextTool also has a trackpad feature, letting you move your finger on it like you would with two fingers on the iPad onscreen keyboard.

A URL extension is also offered by TextTool. This means you can launch it from apps like Workflow and Launcher Pro, and it even has URL extensions for positioning the trigger specifically.

What is core to TextTool is it’s 27 text transformation actions. These let you indent, add list markers, change cases, split lines of text, encode and decode text, and many, many more. To access these things, you use the menu bar at the top right of the editor. Another great thing is that you can edit any of these transformations, and add more if you want to. You can also create scripts in the built in JavaScript editor, and then run those as extensions. 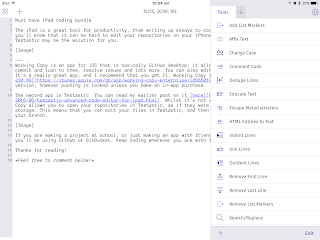 Once you have finished working on the document, you tap the share button in the text editor, once again at the top right. You can send the document to any other app you have installed. You can also use the preview function, and if you have been using Markdown, it renders it in HTML which you can then share across apps, or move into Textastic or upload to an FTP server. Sadly, you have to go through an app such as Drafts 4 if you want to export it as the markdown preview to an app such as Evernote.

One of the things that I had a problem with is that if you switch app, and TextTool gets shoved to the back of your app switcher for some time, the stuff you wrote is gone. TextTool clears the workspace, and this can be a problem if you are trying to write something like an article or essay and you switch apps often. The same goes with force-closing an app. I think that TextTool should preserve the text in a single workspace until you clear it.

All in all, I think TextTool is a great tool for those that need powerful text transformation and editing. It’s got many features that apps are lacking, and you can make your own transformations or even program them yourself with the built in JavaScript console. If you are looking for an advanced text editing tool, TextTool is for you. You can find it on the App Store for £4.99.