Bear Notes is an app that uses markdown to give you a clean and beautiful writing experience on your iPad, iPhone and Mac. It uses markdown and allows you to sync your notes between devices, with a beautiful look. 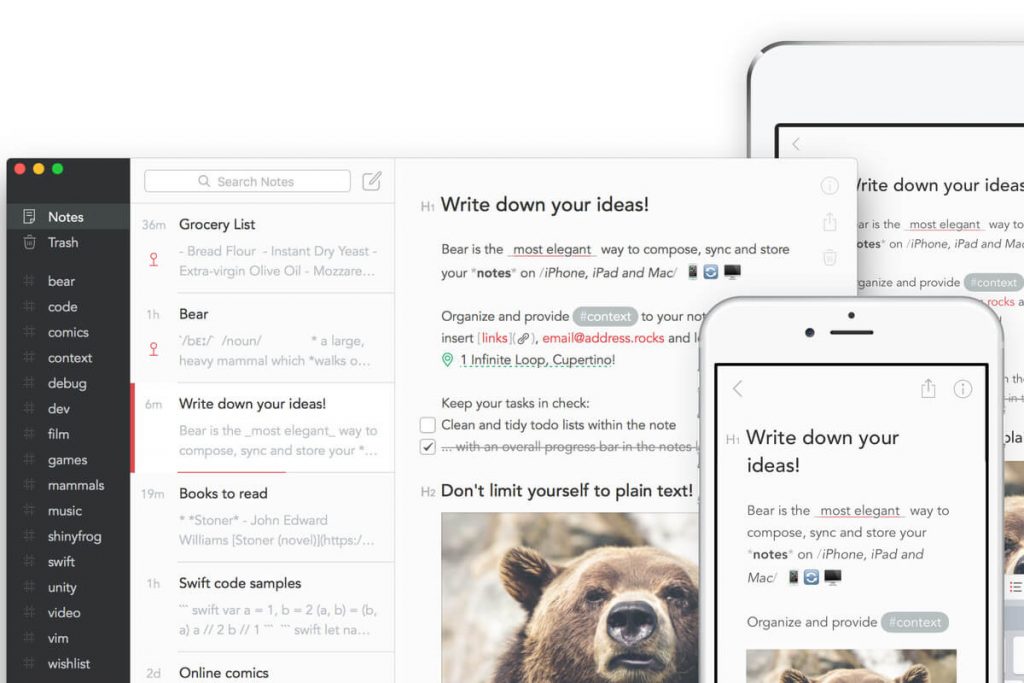 If you are looking for a neat markdown app that works across your Apple ecosystem, Bear Notes has you covered. It offers both a free and pro version, with the pro version giving you syncing, more themes, more export options and advanced searching. It’s also a good way to support development of Bear.

Now let’s get into the interesting stuff – markdown and how Bear works with it. This is one of my favourite things about Bear. It doesn’t leave raw markdown, but instead compiles it down and looks great. Let’s have an example – in markdown, your create a header by using hashtags – header one is # Header 1, header two is ## Header 2. Often the hashtag would just be left there. However, with Bear, it turns into a small H1 to the left of the header. It looks really neat, and I like the way that messy markdown isn’t left across the page. If you add a link, instead of showing the whole thing, it just shows a link icon where the whole link would be. It’s sort of like a live previews whilst still having the markdown on the page, and I really like it.

Bear has all the standard markdown features, such as italics, bold, code blocks and the like, however it uses a slightly different syntax. For example, for italics you use / forward slashes instead of the standard single asterisk. For bold you use a single asterisk, and for bullet lists you use an asterisk, and then don’t close it. Quotes are as normal, being the  greater than symbol. Bear also has checkboxes, which are quite cool. You use these by using a hyphen, which would normally donate a bullet list. Number lists are normal of course.

Whilst I like the way it has a live preview, I’m not the biggest fan of the weird syntax, but I can adapt to it.

Another cool feature is that you can add photos and files into your notes. I have found that you can’t resize images in notes which is a pity, but it may come in a future update. What I really like is adding files. You can add files from and cloud storage you use.

One of Bear Pro’s features are more export features. Bear’s export is a little weird – each type works differently. I’ve found that code blocks don’t transfer over to a .docx document, which is a pity, and the text is abnormally large on exports such as PDFs. That being said, you can export as a .JPG, which is great. There is also the share extension, meaning you can export to any app. However, none of your formatting will transfer.

Bear notes uses a clever way to sort your notes. You add ‘tags’ to each of your notes, and this sorts them into the correct folder. For example, if you wanted to have your note in a folder called ‘History’ under your main school folder, you would write #school/history. The note would then appear in a menu under there. You can add notes to the main school tags, and you can create as many of these as you want.

All in all, Bear notes is a solid option for notetaking on Apple devices. I’ve heard that a web version is coming soon, which is great. If you are looking to take notes on your iPad, iPhone or Mac, Bear notes is certainly a solid option. I wouldn’t say I would pay for Pro yet – mainly because I currently use Evernote, and that Bear is available on Windows (yet). If Bear Notes introduced strong Evernote auto export, meaning that it exported to Evernote with all the formatting, images and files in the correct place, and if a web or Windows version was introduced, I would be tempted to pay for Pro. I’d use it as the markdown interface for Evernote.

If you’re on the Apple Ecosystem, and you are looking for a notetaking app, I would recommend you check out Bear Notes and give it a go. I think that it’s best feature is the live markdown preview in the editor – I love it.

Bear Notes is available for download for iOS and Mac.