The Chipolo Plus is a coin shaped bluetooth tracker that you attach to anything you don’t want to lose. With the companion iPhone, Android or web app, you’ll know that you won’t lose anything again.

Get 20% of your Chipolo if you buy through this link!

The Chipolo is a little bluetooth tracker that you add to things you don’t want to lose. It looks like a coin, and is thin, light and simple. You pair it with an app, and you’re all good. The app is what makes Chipolo special. Let’s say you drop your wallet when you’re out and about. The app can connect to the Chipolo as far as 200 ft. Once the app loses connection to the Chipolo, your phone will alert you that it has lost connection. Now here is where the magic happens – the app shows you on the map where your Chipolo’s last known location was – so where the app lost connection. You go back to this area, and the app connects to your Chipolo. You can then ring it, and you’ll most likely be able to hear it. It’s got a very loud tone. 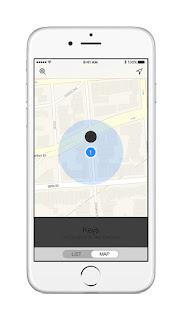 If you still can’t find it in the area that it was last known to be in, Chipolo still has an awesome feature that can save you. You can enable the community feature, which means that if anyone with Chipolo installed on their phone walks past your Chipolo, you’ll get notified. I think this is an awesome feature, and certainly makes Chipolo stand out from the rest. However, remember that this depends on the amount of users Chipolo has, meaning that the more it has, the more likely your item will be found.

All this being said, check out the Chipolo video below to get a quick summary:

Now onto the review bit. Chipolo comes in a neat little box, which is easy to open and straightforward, something I like. I prefer simple packaging to over complicated ones, and the Chipolo still looks great and is simple at the same time. 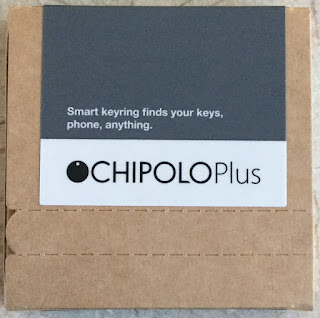 Your Chipolo is in a little plastic holder, and you simply pull it out. Then, below there is a keyring that you can attach to your Chipolo to. Along with the Chipolo itself and the keyring, it comes with a handy quick start guide that tells you where to find the app and how to set it up. On the other side of a box, a few uses of Chipolo are displayed, as well as how to quickly get started. 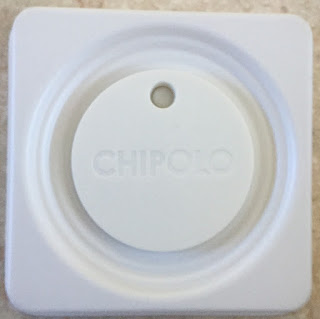 I quickly downloaded the app on my phone, and was very surprised by how quick it was to set up the Chipolo. You’ll need to switch on your bluetooth to work with the Chipolo, as that is how it connects to it (I’ll explain about how it works a little later in the post). Just firmly press your Chipolo and listen for the sound, then hold your Chipolo next to your phone. It will take a few seconds to connect, and then you are done.

The app will take you through a small guide on how to use the app, and then you are good to go. Make sure to name your Chipolo something that makes sense – for example ‘keys’ if you put it on your keys. 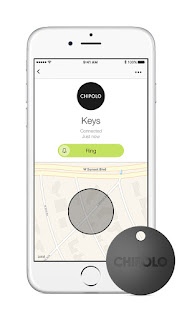 The Chipolo app comes with a handy feature – named locations. Here, you can mute in range and out of range notifications, so if you are at home or school for example. Another awesome feature it comes with is a bluetooth strength meter. Tap on the Chipolo circle above the name of it, and it turns into five dots. If the largest dot is closest to you (at the bottom) your Chipolo is near by. If it’s far away, at the top of the screen, your Chipolo is far away. This means that if you can’t hear your Chipolo, you can use the meter to get closer to it, and then you may eventually hear it.

I’ll go over Community Search again, as I think it’s a great feature. If you can’t find your Chipolo, you can enable notifications. This means that if someone with Chipolo on their phone walks past your Chipolo, you’ll get notified that they had just found it, along with the location updated to show where the Chipolo is. I love this feature, and I really think it makes the Chipolo stand out from the rest.

Another great feature is that if your phone is missing, you can click on your Chipolo, and it turns the volume up on your phone and then starts playing a tone. This even happens if the Chipolo app is closed on the phone, and if the phone is in lock mode.

‘What happens if I lose my phone and my Chipolo?’ you may be wondering. Well, you’re still covered. Just head over to the Chipolo website tracker and you’ll be able to see all the last known locations of your Chipolo’s and your devices with the Chipolo app running on them. For your Chipolo, you can select Notify when Found to get a notification if a community member walks past, or for your phone you can send a message to it that says that the phone is lost, and to email a certain email or call a certain number. You can customize this message.

A more fun feature the Chipolo app offers is the option to take a photo with your Chipolo. On the app, open ‘Take a Selfie’, and then you can click the Chipolo to take a picture. I don’t really see the point of this, but it is fun to muck around with.

I’ve found that the bluetooth varies over distances. In parks, its the full 200 ft promised, but in houses and flats the range was around 80 feet, but that is to be expected.

However, Chipolo Plus does not have a replaceable battery. The battery in it only lasts for 12 months, and then you have to buy a replacement, but you get 50% of the replacement via the Chipolo renewal program. The Chipolo Classic has replaceable batteries, which each last from 3 to 6 months. It uses CR2025 batteries, which you can pick up at any old shop. The app tells you when you’re running low, and that you will need a replacement battery/Chipolo soon.

Be sure to check out more detail on the differences here.

Here’s a quick sum up of the Chipolo:

Cons
All in all, I really recommend checking the Chipolo out. From what I have seen, its cheaper and better than it’s competition out there, and I have found it very useful whilst I have been using it.
If you buy via this link, you get 20% off! That’s £4.20 off if you buy one, meaning you only pay £16.79.
Thanks for reading!
Feel free to comment below!
Advertisement