iOS 13 brought along large improvements to both the iPhone and the iPad. The iPad became more useful than ever, with the ability for side by side apps, a better home screen layout, split screening, and much more. In this post, I’ll go over most of the apps I have used extensively throughout 2019. 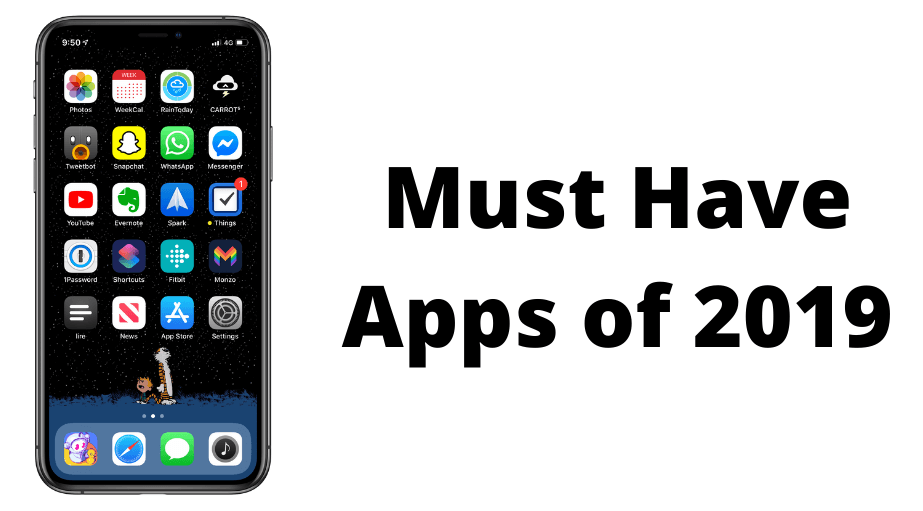 I have been using my iPad less for productivity this year – the purchase of a desktop PC and a laptop have meant that I have moved away from my iPad and iPhone as my main productivity device. However, I have still been using a wide suite of apps.

Things 3. Once again, Things 3 has been my task manager of choice, I’ve been using it for years, and I haven’t found a comparable app that allows you to set both due and deadline dates on tasks. Whilst Things does lack a Windows client (you can set up a virtual machine to use it on Windows however), or a web client for that matter, there simply isn’t anything like it that has cross platform availability. Things does get regular, but minor and slow updates, and there are features that I would love to see added – for example the ability to add photo attachments – but other than some small nuisances, I am very happy with Things 3. 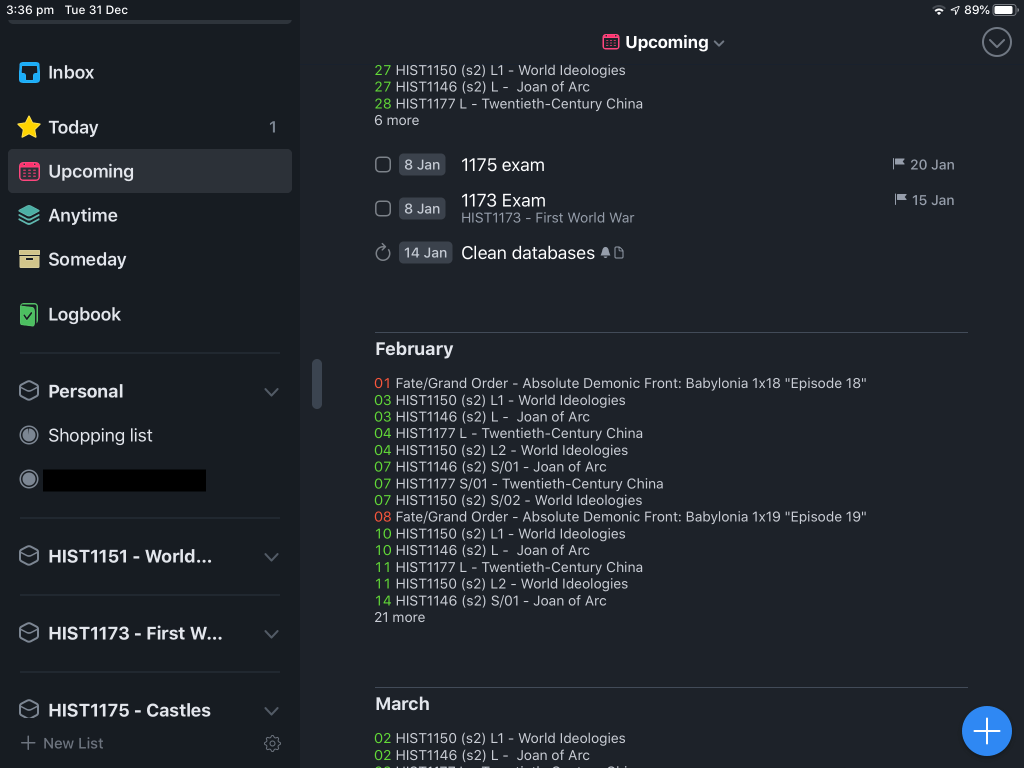 Evernote. Still my notetaking app of choice, I’ve been using Evernote since 2014. I like the relatively simple interface it has, but the power of tagging and search. OCR allows me to search through attached documents and photos. With tens of thousands of notes, Evernote has done me well over 5 years of heavy use.

OfficeSuite. I’m not a big fan of the Word app on iOS, and I’ve found that OfficeSuite is a much better experience. It contains a whole host of tools – spreadsheet, slideshow, and much more – OfficeSuite makes it easy to edit documents on the go. I’m a Dropbox user, and it works great with Dropbox. In addition to this, it doesn’t disrupt citations that have been added in on desktop, something which I had big issues with on Word for iOS. 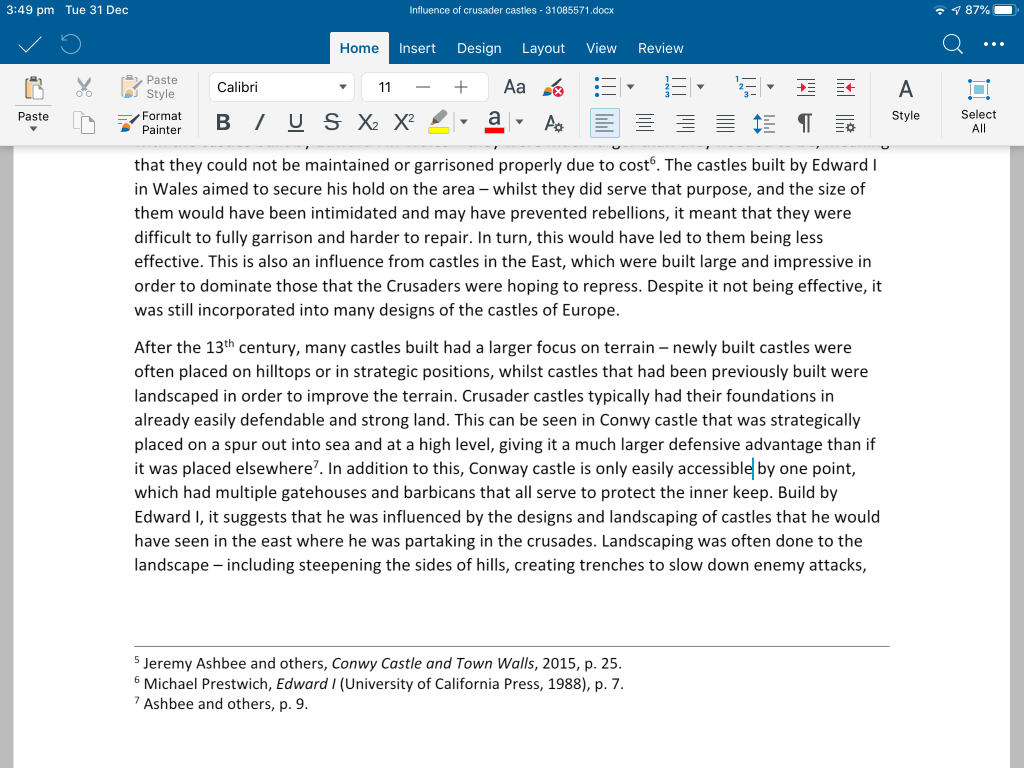 Coda. Coda has come in incredibly hand when I’ve had to do work on my various servers and sites. With it’s built in code editor, and the ability to sync server between devices, Coda has been really useful in making quick edits when away from my computer. It’s easy to show hidden files, and search through your server for the file you want. 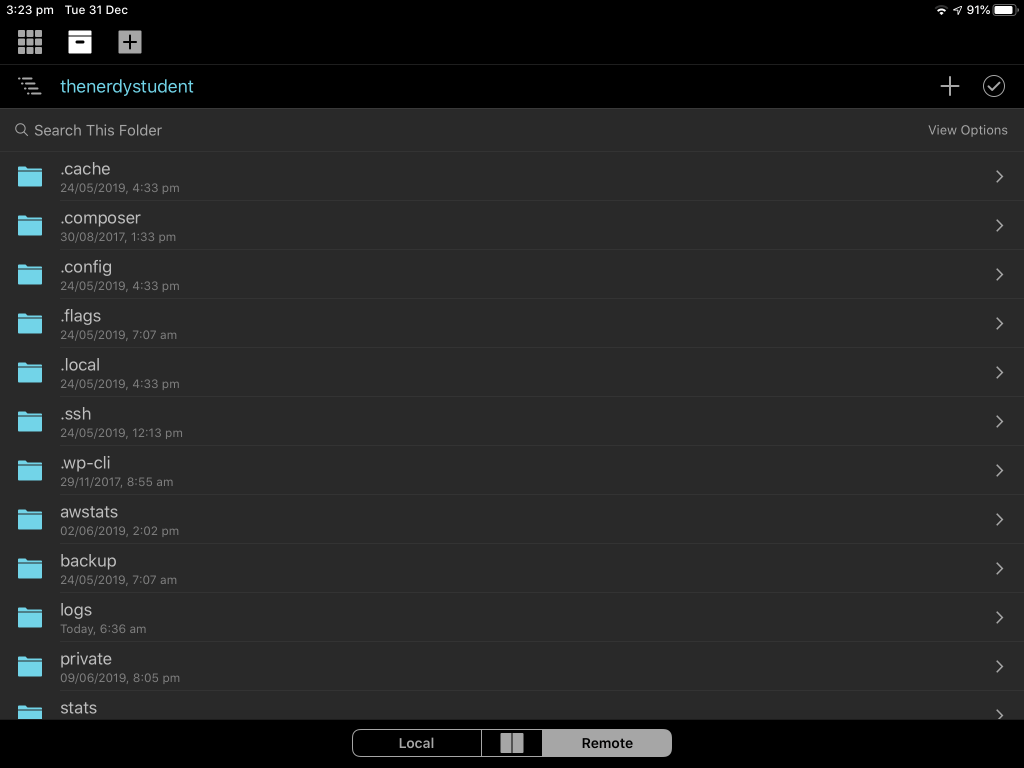 Prompt. My go-to SSH client, Prompt gives me control over my servers when I am away from my PC. I can update my Raspberry Pi, install new programs and manage it all from my phone – and the same with my servers. I like that Prompt can sync servers across devices using Panic Sync (which Coda, above, can also use). The clips feature is very useful for quickly inputting regularly used commands. 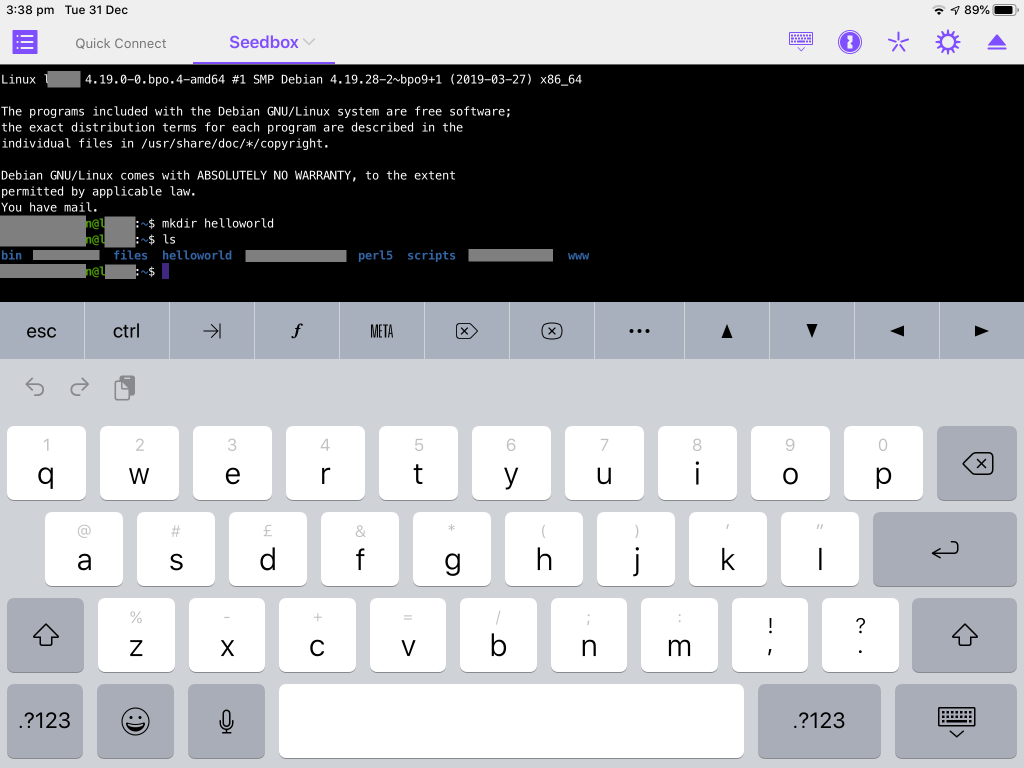 Spark. Ever since Spark came out on iOS, I’ve been using it. With the recent redesign, Spark looks even better than before. It’s the only email client that has worked perfectly across devices, and I always get notifications of mail immediately when it’s delivered. Spark works great with multiple accounts, and makes it a pleasure using email on iOS. The powerful search is also great, making it easy to find specific emails.

OpenVPN. The official app, OpenVPN allows you to add your custom VPNs to iOS. By dragging and dropping your profiles and certificates via iTunes, you can connect to your VPN on your server and browse in relative privacy. The app also provides a nice graph to show network usage, as well as rough speeds.

AdGuard Pro. An affordable ad blocker for iOS, the best feature of AdGuard Pro is the DNS level ad blocking that it offers. By switching on AdGuard DNS, you can stop adverts showing up anywhere, from in apps to the browser. AdGuard allows you to select filter lists for Safari, meaning you can block out standard ads to annoying cookie notices. A free version is also offered, which doesn’t include DNS level blocking.

Carrot Weather. Still my favourite weather app on iOS, Carrot Weather makes checking the weather fun. With achievements and quirky lines, Carrot Weather still manages to put across one of the best weather app experiences I have had. The interface is easy to use and intuitive, and there is a vast range of sources that you can choose from to get the most accurate weather forecast possible.

Apollo. Still living in my home bar, Apollo is one of my most used apps on my phone. A Reddit client, Apollo links to your Reddit account(s) and lets you browse without ads on a brilliant and easy to use swipe based interface. It makes it easy to up vote and down vote, as well as reply to or save comments and posts. Recently the private message system was redone, making Apollo an even better Reddit client for iOS.

Igloo. An IRC client for iOS, Igloo makes it easy to sync servers across devices as well as get into conversation on both public and private servers. The UI is really well done, making it easy to respond to, reply, and use IRC commands, and the app works well with ZNC bouncers.

Apple News. I use the Apple News app to catch up on breaking news and more general news, such as what is going on in the world. I like the interface, and despite Apple pushing Apple News+, still find the app decent for a free user.

Lire. I am still using Lire as my RSS client. With a decent interface, and great full text extraction, Lire is linked to Inoreader to deliver a catered RSS feed of sites I like and news I want to see. Lire plays perfectly with Inoreader, syncing folders and read status. Lire lets you star news for later, and also has caching settings so you can download your feed for offline consumption.

As a note, I don’t play many games on my iPad and iPhone anymore, and mainly play on my PC. Due to this, I won’t include a gaming section here, as pretty much the only mobile game I now play is GTA:SA.

Infuse 6. I have been watching a lot more content recently, and Infuse 6 is a perfect media player. It makes connecting to remote servers, Samba shares, and anything you could really want to connect to so easily, and automatically adds metadata to all the files you have. This makes it a really nice experience to browse media, and also makes it play really well with Trakt, an amazing TV show tracking tool.

Every show is categorised into seasons, and it is very easy to navigate them. You can also choose to download individual episodes, seasons, or entire shows. There is so much to Infuse, and I urge you to check it out if you play any media on your phone or iPad. 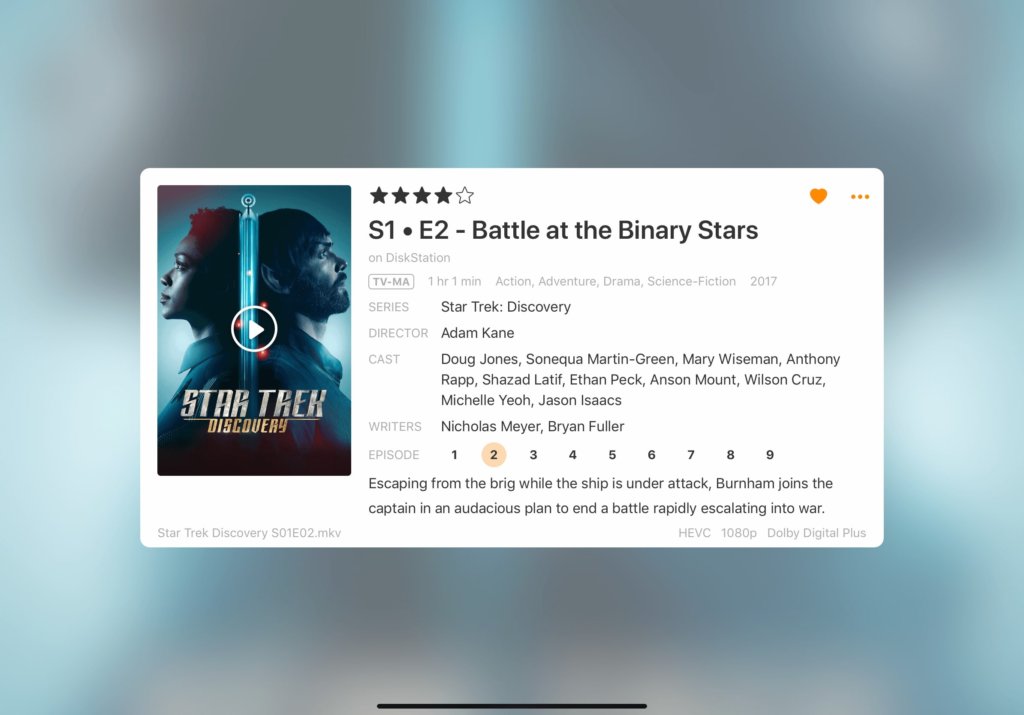 Marvis Music Player. This plugs into the Music app, basically being a skin for Apple Music and local music files. It has last.fm integration, and in general, looks and works much better than Apple Music. I’ve been using it since June, and have really loved it. The interface is easy to use, bold, and well spaced. The app is incredibly customisable, allowing you to choose what menu items you want to show, themes, app icons, and much more. 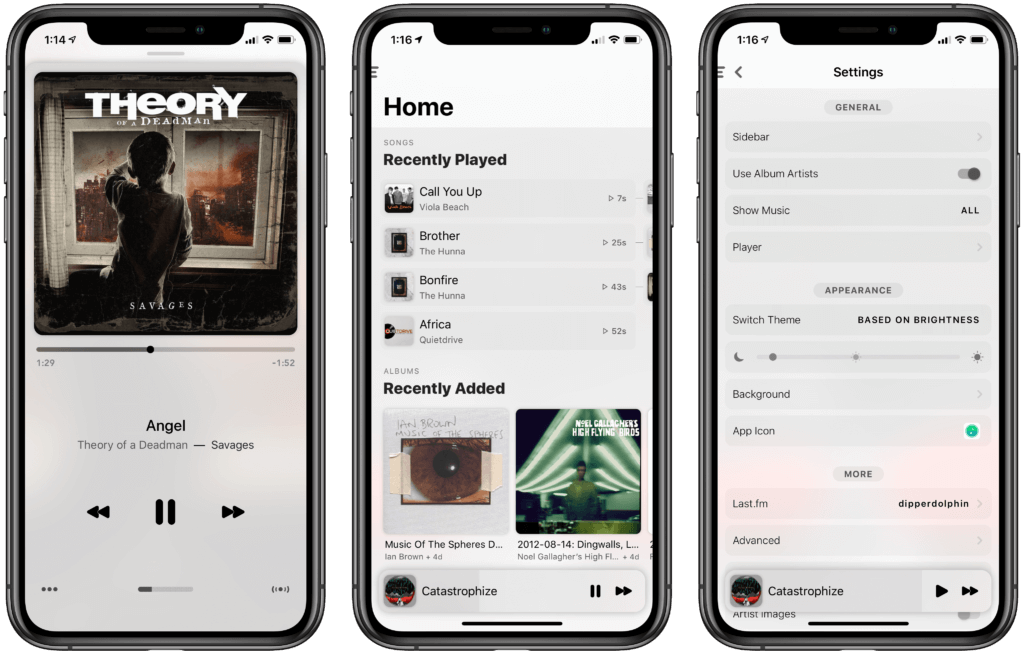 Aukey 20,000 mAh battery. For yet another year, this battery has performed extremely well, keeping my iPad topped up on long flights and my iPhone going for the duration of trips. Whilst it is relatively large in height and width, it is quite a slim battery, meaning it can tuck away at the back of your bag without causing a hassle.

eBag Slim Professional. I’ve been using this bag daily for two years, and it has been brilliant. It’s slim form factor works well on the packed underground, and it also doesn’t swing around when riding a bike. It fits my laptop, headphones, batteries and cables well, and the hard case bottom means that my devices are protected from plugs and that the bag can stand up.

Blitzwolf BW-FYE1 earphones. These earphones have held up great over a year of heavy use. For under £30, they are an amazingly affordable pair of truly wireless earbuds. Whilst sound quality won’t blow you away, they make up for it in price and practicality. The earphones last up to three hours of use, and the case will recharge them 10 to 15 times.

Kindle. I’ve been reading a lot more this year, and have returned to using my knackered Kindle Touch. Amazon offers a much newer and improved device over the one I use, which I would recommend to anyone who wants to read more. The screen doesn’t wear on your eyes, and the Kindle can fit thousands of books. Perfect for a holiday or to use during a commute.

Whilst I have used my iPhone and iPad less in general throughout the year, there is still an impressive array of apps that can be obtained for the devices. My use cases for the devices has changed, and that means that the apps here may be a little different to usual.

You can see my previous must have app posts here, going back to 2016.

Anyway, those are my apps of the year – the apps I’ve been using the most and have been most impressed with. As always, I’ll do another roundup next year. Thanks for reading! 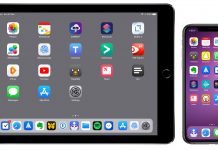 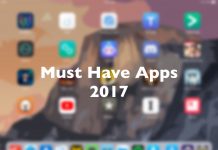